Oscar-Nominated Doc 'Edith+Eddie' Gets Honest About Abuse Of Elderly 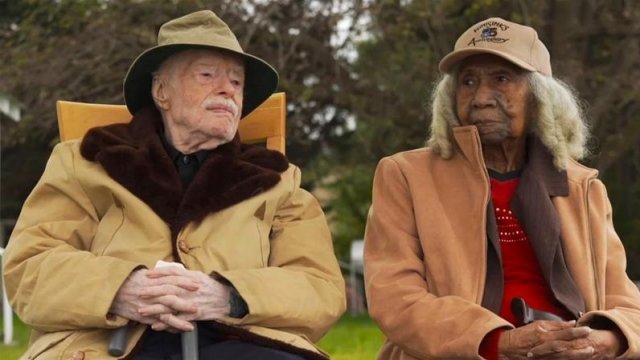 SMS
Oscar-Nominated Doc 'Edith+Eddie' Gets Honest About Abuse Of Elderly
By Ben Schamisso
By Ben Schamisso
February 23, 2018
Newsy sat down with director Laura Checkoway to discuss themes in her short documentary, which features a devastating love story.
SHOW TRANSCRIPT

Laura Checkoway certainly won't be the most famous director in the room at the 2018 Academy Awards ceremony. But that's exactly what makes it so special. Her second film, "Edith+Eddie," is one of five contenders for best short-subject documentary. She not only directed, produced and edited the film, but she also independently financed it with her fellow producers.

The film follows the lives of Edith and Eddie. When they got married in 2014, they were in their mid 90s and were America's oldest interracial newlyweds. But a family feud threatens to tear them apart.

The documentary indirectly draws attention to the elderly guardianship system, which, Checkoway says, "is in great need of reform."

If an elderly person hasn't arranged for a relative to take care of them, should their cognitive abilities worsen, the state will appoint a guardian to take over their legal and financial decision. This is also the case for elders whose family guardians are in disagreement — as in Edith's story.

Although some would agree court-appointed guardians can serve an important role in our society, critics of the system say there aren't enough safeguards against abuse. The National Association to Stop Guardian Abuse advocates for guardianship law reform. The group argues over the years, that law "has been misapplied, misused, and sometimes … manipulated." The group also warned about the dangers associated with giving strangers "total and absolute control of life, liberty, and property of their wards."

Checkoway talked about her Oscar-nominated film with Newsy's Ben Schamisso.

NEWSY'S BEN SCHAMISSO: What would you say the documentary touches on? What are the major themes?

LAURA CHECKOWAY: It brings up elders' rights, dignity and honor, and I think we live in a culture that often disregards some of the most vulnerable among us. And there's a certain reverence or honor for elders that has been lost. What happened with Edith and Eddie is happening to elders all over the country, and most people don't know about it unless it happens within their own family. People that have seen the film told us that this inspired them to go home and talk with their families and loved ones.

SCHAMISSO: Was it a challenge to embed yourself in Edith and Eddie's life, considering that they are quite old?

CHECKOWAY: They opened up right away, and they were so happy to be together and to have found love at this time in their life that they were just really generous and shared their story. 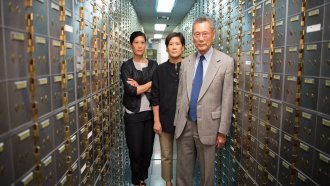 SCHAMISSO: One of the most powerful scenes in the documentary, when Edith is being chased from her own house, it's just such a traumatic scene. What was your state of mind being there in that moment as a filmmaker?

CHECKOWAY: As a doc filmmaker, you know you go on this ride, and it often takes you to all sorts of places and a lot of twists and turns. You just want to stay centered on what you're there to do and the work, and at the same time, these are people who we really care about, and so our hearts were breaking.

We're standing outside in the rainstorm, and Corwin, who was running the sound, said he was still picking up the audio, and he kept saying, "Eddie is amazing, Eddie is a hero," and I didn't know what was going on until, you know, we got home and got to hear the footage.

You never know who you're going to be in any given moment until you're faced with certain experiences, and so who he was in that moment, it really shines through.

CHECKOWAY: She passed away in March.

SCHAMISSO: Do you think she could have ever imagined that a documentary about her own life story would be nominated for an Oscar?

CHECKOWAY: That's a great question. I don't know, but I know that her daughter Rebecca, she just finds it so incredible. She said her mom was from a part of Virgina in the Appalachian Mountains called Tinywood that's not even on the map, and she said, "From Tinywood to Hollywood," which I thought was, you know, really sweet to hear. I do feel like Edith and Eddie are still with us. Every time people see this film, they're touched by it, and I think that something in them knew that their story represented all elders.

SCHAMISSO: How did Cher become an executive producer?

CHECKOWAY: I was already in the process of making the film, and Cher saw a news clip that said the couple's marriage was threatened. She was moved to want to help them, and so she got involved behind the scenes. And out of her generosity, she hired an attorney to help Rebecca in her fight to first keep the couple together and then to try to bring Edith back home.

She saw the film, and she loved it, and she agreed the lend her name as an executive producer.

Having somebody with that kind of star power is, you know, extra special, and I just think that there's something about it, of, just all of us as human beings, being the same and caring about each other. Something about that that's at the core of this, where, whether it's me or Cher or Edith or whomever, that we're all women and people and that just what tugs at our hearts is — there's just a lot of commonality there.

SCHAMISSO: I know you also are a very successful writer and feature journalist, so I'm wondering how does being a writer help you in your documentary filmmaking?

CHECKOWAY: I became a documentary filmmaker because a young woman, Lucky, whom my first film was about. I started writing about her for a magazine piece, and then she's such just a dynamic person that I was like that woman has to speak for herself. And so film felt like the best way to do that.

My journalism background really — without realizing it — it was great training for making documentaries because at the time, I was mainly writing profiles about entertainers and artists, and they would let me really deeply into their lives in a way that wasn't common. And so that was, you know, just the first taste of getting access into people's lives and just making them feel comfortable enough to want to share their stories.

I actually had just filmed this documentary with Kendrick Lamar I think a few days before I went to meet Edith and Eddie for the first time, and I realized that the way that my heart was beating when I was on this bus from NYC to Virginia to meet Edith and Eddie, I just realized what a fire they had already lit in me before I even met them and how it doesn't matter whether you are a celebrity or someone who people don't know, that you know that a good real story is a good and real story.

SCHAMISSO: I could really relate when at the end of the film, it said, "directed, edited and produced by Laura Checkoway." I could tell you really had ownership of it in a way that's not always common when you think of the Oscars.

CHECKOWAY: And that, again, it just means so much more to be getting ready to be in that room.

SCHAMISSO: Going to the whole ceremony part — what's the one thing you're the most looking forward to?