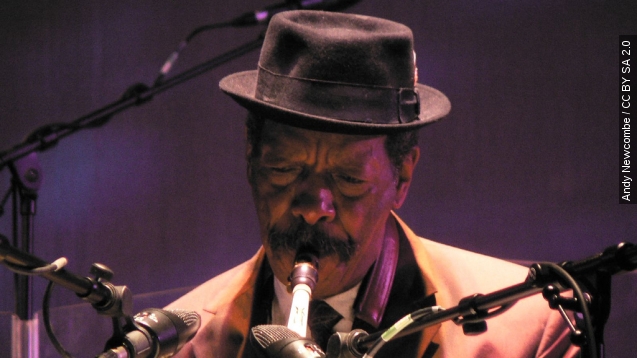 Jazz musician and composer Ornette Coleman died Thursday at the age of 85 due to cardiac arrest, according to a family representative.

"You can't see outside yourself, but we do have imagination. The expression of all individual imagination is what I call Harmolodics. Each beam of imagination is their own unison and there are as many unisons as there are stars in the sky," Coleman said.

If that sounds a bit esoteric, it's supposed to. Coleman, whose most prominent instrument was the saxophone, was best known as a pioneer of free jazz — a style that was unlike the conventions of his time. In fact, "Free Jazz" was the name of one of Coleman's albums.

In a way, his music sounds like a bunch of musicians just kind of doing their own thing.

"Whatever I don't do, musically, with Ornette, it's not his fault because he gives me complete freedom," drummer Charles Moffett said.

Los Angeles Times reporter Randall Roberts wrote, "Somebody once described his music as sounding like a ragtime band -- whose members are each playing a different song."

Not everyone was on board with Coleman's style but that style was a part of his genius, leading some to call him a "legend," or an "iconoclast," or "the front of the avante-garde pack."

"My father was just being himself and exploring what he wanted to explore. It just so happened that what he was exploring, was outdating what was current," Coleman's son, Denardo, told BBC Radio.

Coleman continued recording music up until his death, releasing an album titled "New Vocabulary" in late 2014. We'll leave you with one last word from Coleman coming from the 1966 mini-doc "David, Moffett, and Ornette: The Ornette Coleman Trio":

"I'm in love with eternity. What I mean by that is that I don't care about how many changes that goes on, you know? As long as it keeps going on," Coleman said.