Orion Manned Mission Might Not Get To Space Until 2023 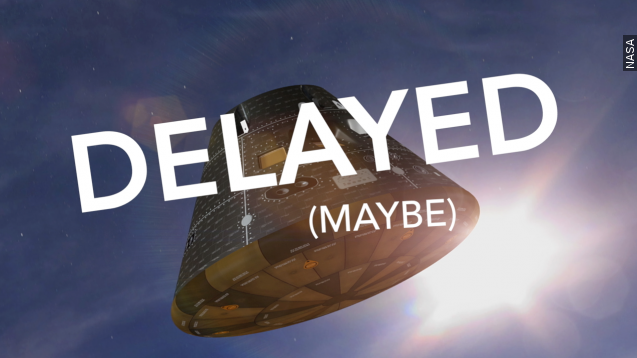 SMS
Orion Manned Mission Might Not Get To Space Until 2023
By Evan Thomas
By Evan Thomas
September 17, 2015
Orion's first manned mission is scheduled for 2021, but problems might delay the launch by a few years. Manned spaceflight is complex and expensive.
SHOW TRANSCRIPT

NASA could push back the first manned flight of its Orion capsule to 2023.

The space agency is still shooting for a 2021 launch date, but NASA Associate Administrator Robert Lightfoot says that's getting less tenable. Turns out space is complicated. (Video via NASA)

"It's not a very high confidence level, I'll tell you that, because of the history — the things we see historically pop up," Lightfoot said.

Those "things" can include software development troubles and complications from reusing equipment on multiple flights. (Video via NASA)

NASA's reviews of the Orion program haven't spotted any such problems yet, but officials want to account for the possibility all the same.

At stake is Exploration Mission 2, or EM-2. The manned mission is expected to reuse critical hardware from earlier flight tests. This means if anything happens to that gear between now and then, NASA will have to wait for replacements — and potentially delay a launch. (Video via the European Space Agency)

Along with being complicated, space is also expensive. (Video via NASA)

NASA will spend at least $6.77 billion on Orion from October 2015 until the launch of EM-2 "no later than April 2023." The agency says it's still on budget but also says it might be able to do more faster if it had more funds. (Video via NASA)

More funding for space exploration has some congressional support, even if it is partisan. Following NASA's announcement, Rep. Lamar Smith issued the latest in a series of criticisms of the Obama administration's budget priorities, which cut NASA's exploration funds to boost Earth sciences. (Video via the House Committee on Science, Space, and Technology)

In the meantime, testing and construction continues. NASA facilities are assembling a spacecraft for Exploration Mission 1, which will send an unmanned Orion capsule to orbit the Moon. That launch is still expected in 2018. (Video via NASA)

This video includes images from NASA and music from Birocratic / CC BY 3.0.