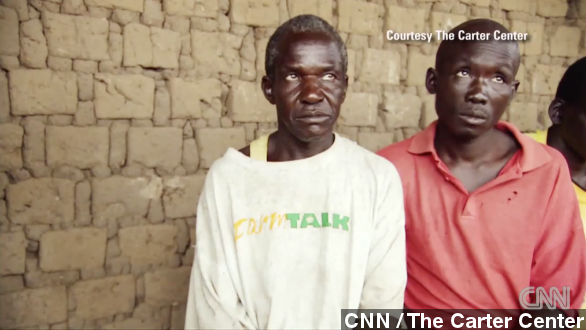 World leaders gathered in Paris Wednesday to announce a public-private partnership that started two years ago to fight against neglected tropical diseases is working.

​​These diseases, NTDs for short, put 1 in 6 people worldwide at risk of sickness, being disabled or disfigured, according to The Jakarta Post. The World Health Organization's director general says:

"Together with the governments of endemic countries, we are fast approaching the goal of controlling or eliminating many of these ancient causes of human misery." (Via Global Health Strategies)

One of the NTDs is river blindness. According to the World Health Organization, it affects 18 million people.

But 99 percent of those cases are found in Africa. (Via The Carter Center)

The disease is spread through these small black flies, which are found in fast-flowing waters. When one carrying the disease bites a person, it drops worm larvae in the skin. (Via Wikimedia Commons / Jake Lindsey's Ecology of Commanster Site)

These worms cause intense itching, rough, depigmented skin and eventually, blindness. (Via The Carter Center)

River blindness is not fatal, but CNN reports living with it is miserable. And while there is no vaccine, a drug called ivermectin stops the spread of the worms, thus treating those infected with the disease.

Former President Jimmy Carter's Carter Center is part of the group fighting the disease. Carter tells CNN, "We found if we did it at the right time and in the right way that we could not only control the disease, but we could actually eliminate it."

He goes on saying they've successfully eradicated the disease in six countries in Latin America. (Via The Carter Center)

Uganda has plans to do the same by the year 2020. At the event in Paris, a group of WHO partners announced new funding in the fight against NTDs, including a $120 million donation toward NTD control and elimination in Africa.