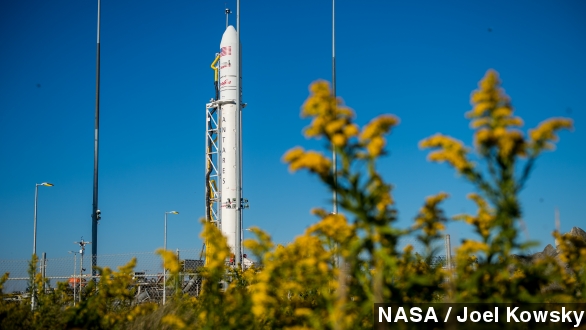 By Mikah Sargent
October 28, 2014
Orbital Sciences' third resupply mission to the International Space Station was put on hold, thanks to a sailboat in the flight path of the rocket.
SHOW TRANSCRIPT

The Orbital Sciences Corporation was supposed to send one of its Antares rockets on a resupply mission to the International Space Station on Monday.

The rocket was prepped and ready to take off from NASA's Wallops Island Flight Facility in Virginia. But at T-12 minutes the launch was scrubbed because of a sailboat in the launch path of the Antares rocket. (Video via NASA / Orbital Sciences)

It remains unclear how exactly a sailboat found its way into the rocket's launch path.

But, as is the way of the Internet, it didn't take long for WaywardBoat to show up on Twitter. Yes folks, even scrubbed NASA launches can inspire parody Twitter accounts. Our favorite: “I once dated a rocket. Isn't this just like the last scene of the movie where the guy stops the girl at the airport before she leaves?”

This will mark Orbital Sciences' third resupply mission to the ISS. The company's contract with NASA outlines eight missions, ending in late 2016. (Video via NASA)

If you'd like to follow along with Tuesday's launch (and keep a lookout for any wayward boats), you can head to NASA's website where the agency plans to live stream the event.

This video includes images from NASA / Joel Kowsky and music from Chris Zabriskie / CC BY 3.0.