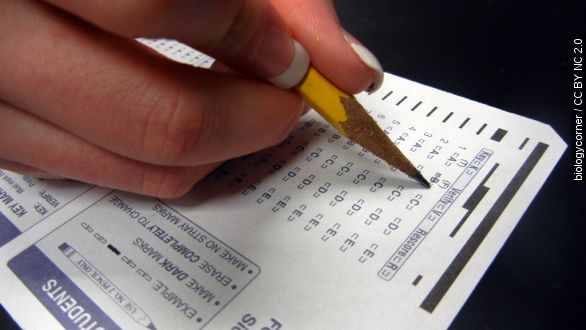 SMS
Opt-Out Protests Continue Against Common Core Testing
By Evan Thomas
By Evan Thomas
April 18, 2015
Thousands of students and parents are protesting and opting out of state standardized testing they say isn’t a good measure of their education.
SHOW TRANSCRIPT

Thousands of students and parents across the U.S. are protesting “common core” standardized testing: with demonstrations and by opting out of this year’s tests.

Common Core is a set of mathematics and language arts standards the Council of Chief State School Officers established to outline what students should know by each year of their K-12 education.

But protests against Common Core are gaining steam. They’re especially visible in New York state, where standardized tests started this week for some 1.1 million eligible students in grades three through eight. (Video via WNYW)

“Day one of testing, and those who opted out seemed to outnumber those opting in at some school districts,” said WCBS’ Carolyn Gusoff.

“There were five kids that I was with.”

“That took the test?”

“Almost the entire auditorium was filled with kids that didn’t take it.”

More than 150,000 students have opted out in New York state alone this year. But proponents of the Common Core say it provides important evaluation for both students and their teachers.

“Those who call for 'opting out' really want New York to 'opt out' of information that can help parents and teachers understand how well students are doing.”

And in New York, at least, opting out presents a real risk to the state school system: if participation drops below 95 percent, the federal government could withhold close to a billion dollars’ worth of funding.

Critics say Common Core testing puts a lot of stress on students and teachers, without collecting meaningful information on their progress. (Video via CBS)

“We have to do a better job of finding ways that evaluate our teachers and students that don’t include high-stakes standardized tests,” Ray Walter told WGRZ.

CNN characterizes it as fallout from the stress of meeting common core standards: earlier this year, some Atlanta educators got prison time for altering standardized test scores. (Video via WSB-TV)

This video includes images from biologycorner / CC BY NC 2.0.