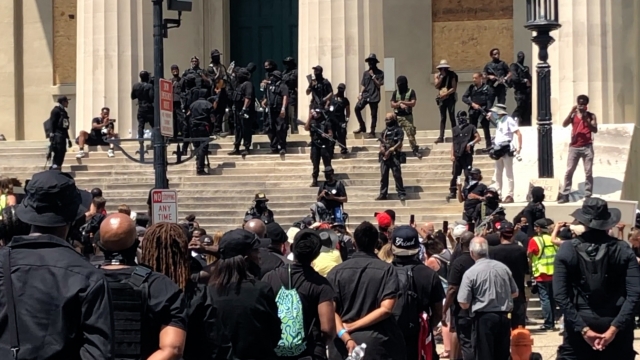 A Black group, including former military members, showed up carrying guns in a march calling for prosecution of police officers in Taylor's killing. The founder of the group, called NFAC, is calling attention to the need to "protect black children, men and women in America."

Hundreds of people marched, with the Black Panther Party lining up behind NFAC.

Meanwhile, an armed far-right group called the Three Percenters showed up in much smaller numbers to observe the NFAC. A member said the group was attending to "provide security."

Two people were taken away on stretchers early in the afternoon after a reported accidental discharge of a firearm.

In Kentucky, it is legal for anyone to carry guns either concealed or in plain sight. That includes semi-automatic rifles.

Taylor was killed on March 13 when three Louisville Metro police officers served a no-knock warrant at her apartment in the middle of the night.