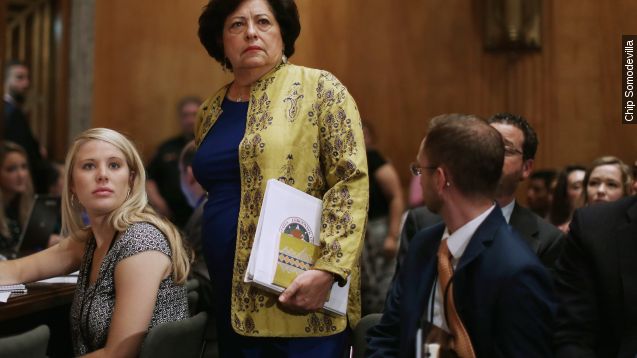 SMS
OPM Chief Steps Down After New Hacking Revelations
By Eugene Daniels
By Eugene Daniels
July 10, 2015
The Office of Personnel Management chief has resigned after revelations that more than 7% of Americans were affected by a data breach.
SHOW TRANSCRIPT

After more than a month of scandal, the director of the Office of Personnel Management, Katherine Archuleta has resigned.

This comes just one day after the OPM announced sensitive data of 21.5 million people, including current or former government workers, was stolen by hackers. After the breach was revealed, lawmakers quickly demanded Archuleta's resignation.

"She should be fired. The president should fire her. Her incompetence is stunning. Her knowledge of the facts is shallow and she has no vision and capability to actually solve the problem moving forward," Congressman Jason Chaffetz, the chairman of the House Oversight Committee told Fox News.

The new number is 5 times higher than the 4 million people the OPM originally announced back in June.

The hacked information included a form filled out by people applying for security clearances. It revealed social security numbers, fingerprints and even information on the applicant's families. (Video via NBC)

But who is to blame for the hack? There's no official culprit, but Director of National Intelligence James Clapper says China is the "leading suspect."

This video includes images from Getty Images and Wilson Joseph / CC BY 3.0. Music is from Christian Bjoerklund / CC BY NC SA 3.0.