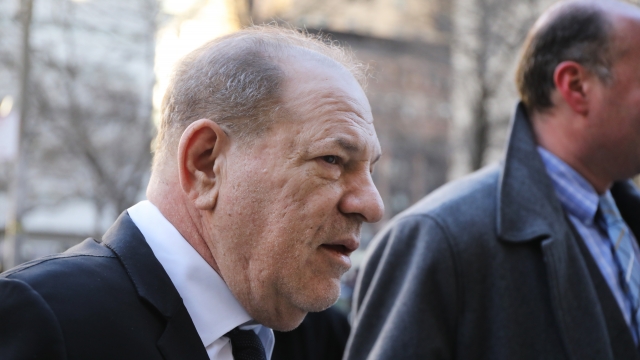 This case focuses on allegations made by two women. One says he raped her in her hotel room in 2013, and another says he forced her to participate in a sexual act in 2006. Several other women are also expected to testify regarding alleged incidents dating as far back as 1993.

The Associated Press reports prosecutor Meghan Hast detailed some of the women's allegations in court. In one account, a woman said Weinstein injected himself with an enhancement before assaulting her. The same woman said that in a separate incident, Weinstein ripped off her jeans while "screaming that he owed her one more time" after she told him she had a new boyfriend.

Weinstein has maintained that he's only had consensual sexual encounters with women. In a preview of its planned arguments, Weinstein's team said Tuesday it planned to cite "dozens and dozens and dozens of loving emails to Mr. Weinstein" from the accusers.

The Hollywood producer was charged in New York with two counts of predatory sexual assault and one count each of first-degree criminal sexual act, first-degree rape and third-degree rape. If convicted on all counts, he could face anywhere from 10 years to life in prison.

Hast said each woman testifying will "describe their fear, their shame and their humiliation — the struggle each went through to push their trauma down and show a brave face to the world."