Only Two Undefeated NFL Teams Remain. Will One Have A Perfect Season? 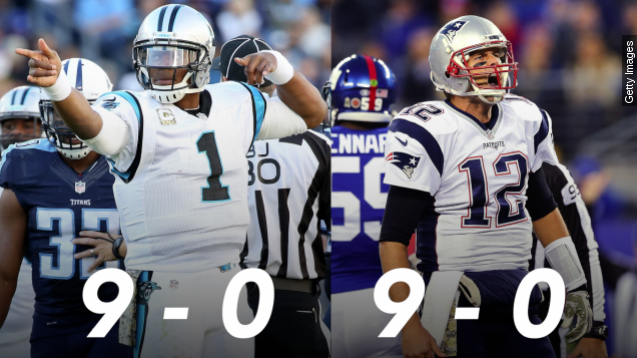 The Panthers and the Patriots are now the only undefeated teams in the NFL. We look at which team has a better shot at a perfect season.

After the fall of the Cincinnati Bengals, only two undefeated NFL teams remain — the NFC's Carolina Panthers and the AFC's New England Patriots.

And since we're more than halfway through the season, talk of which team might stay perfect throughout the entire year is growing by the week.

At first glance, it looks like the Patriots are in the better position right now.

In two weeks, the Patriots will have arguably their toughest test of the season against the 7-2 Denver Broncos — although Peyton Manning's status for that game is uncertain.

The Panthers will get a double dose of their biggest roadblock — the 6-3 Atlanta Falcons — in weeks 14 and 16.

But where the Patriots really pull away from the Panthers is offense and experience.

Both teams have league-leading offenses, but the Patriots have outscored the Panthers by nearly 50 points this season.

And, for the Patriots, this is familiar territory. They've finished 12-4 or better in the last five seasons and went 16-0 as recently as 2007.

It's not so familiar for the Panthers, though. They finished 7-8-1 last season and didn't make any massive overhauls of the roster in the offseason. You'd think such a rags-to-riches season would be nearly impossible.

But the Houston Texans showed us Monday, and Ronda Rousey proved over the weekend, the undefeateds should never overlook the underdogs.

VegasInsider.com lists the Patriots with the best odds to win the Super Bowl at 5-2. The Panthers' odds are 17-2, only fourth best in the NFL.