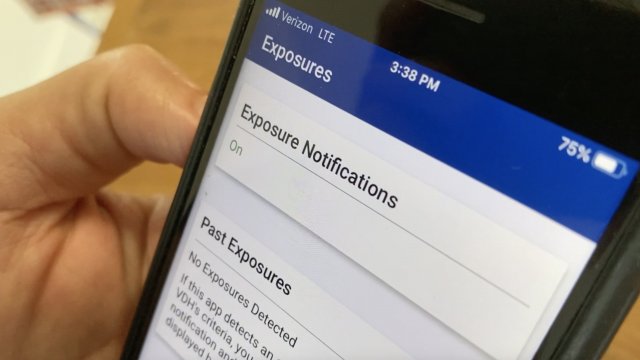 Virginia became the first state to use technology built by Apple and Google to offer a smartphone app able to automatically alert users who come near someone positive for coronavirus.

“This can really help us catch new cases early,” said Gov. Ralph Northam  during the Aug. 5 unveiling of COVIDWISE.

Yet a month later, Newsy found the free app only knows about a tiny fraction of virus cases in Virginia.

Few Virginians contagious with the virus are actually disclosing their diagnosis in the app.

“We have the utmost confidence the app is doing exactly what it is intended to do,” said Jeff Stover, executive adviser to the commissioner of the Virginia Department of Health. “The question becomes, are citizens willing to do their part?"

Exposure notification apps like COVIDWISE use Bluetooth signals to alert your phone when you’ve spent at least 15 minutes fewer than six feet away from someone who also has the app and has keyed in a positive COVID-19 diagnosis.

The only way the app knows about a case is if an infected person opts to tell the app.

“It’s not an easy sell and we didn’t expect it to be from day one,” Stover said.

Data from Virginia show 461,327 downloads of the COVIDWISE app since early August, roughly 11 percent of smartphone owners in the state between 18 and 65 years old, the health department said.

But only 78 times has anyone in Virginia ever reported a positive case of the virus to the app.

That’s despite thousands of new infections each week in the state.

Alabama is testing a similar app and has also seen a low rate of infection reports.

About 42,000 people in the state have downloaded the GuideSafe exposure notification app, but it has received just 46 reports of positive cases.

Memories of personal data security breaches over the years, some involving Apple and Google, may be cooling people to the idea of putting health information into their phones.

The two tech industry titans say the facts are, everyone using their apps is kept anonymous.

Infection cases are reported by code, not name, and because the system relies on Bluetooth, it doesn’t need or use GPS.

“It doesn’t track your location, it doesn’t get your personal information,” said Jim Larus, who worked on the technology and is a dean and professor at the School of Computer and Communication Sciences at EPFL in Switzerland.

Larus says the security settings are much tighter than for many of the other apps and games on your phone, but people still fear sharing private information.

Switzerland has been using an exposure notification app since June and also struggles to get people to trust it.

Only 10 to 20 percent of Swiss infections are being shared with the app, though that’s far more than in Alabama and Virginia.

“What I would say to people in the states is, keep at it,” Larus said. "Perseverance is part of it."

Virginia plans to soon use billboards and PSAs to boost the COVIDWISE app.

Apple and Google reported this week that half of U.S. states are now exploring using their exposure notification technology to build Bluetooth COVID-19 alert apps.