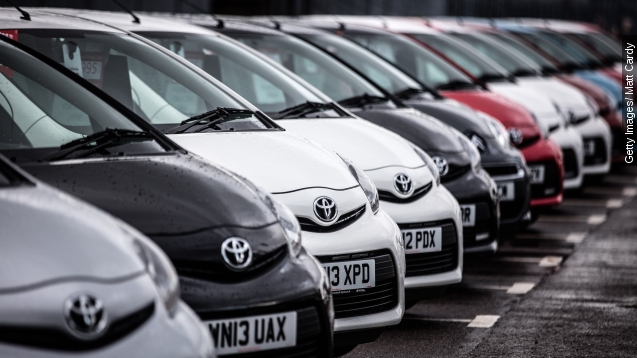 In an attempt to grab more customers, Carvana has built a five-story structure that can hold up to 20 cars. Customers who have opted for the pickup option after buying a car online can then watch as the car is taken off the shelf and delivered right to them. (Video via Carvana)

The full vending machine experience doesn't stop there. Customers are given an oversized coin that they insert into a custom slot. They then watch as their car is picked up from within the five-story tower and taken to the delivery bay. (Video via Carvana)

But the vending machine experience isn't necessarily the first of its kind. Volkswagen has its own automated car delivery system, but it's connected to the company's factory, while Carvana is all about the experience.

Carvana's dramatic front-end investment in the vending machine tower is offset by cutting down on staff and real estate. It's also hoping that by giving customers a video of their car's experience they'll spread the word through social media.

Carvana CEO Ernie Garcia told the Tennessean the original concept of the startup company came from changing customer preferences: "I think what it came down to was there are a lot of people that aren’t very happy with the current way of buying cars, and people are changing their behaviors pretty significantly in buying cars."

And so far, customers are enjoying it. Carvana made $45 million last year and is expected to at least triple that this year. Now, whether customers from outside Nashville will take the company up on its $200 airfare subsidy remains to be seen.