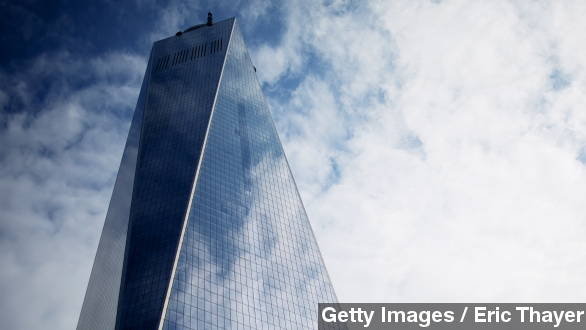 As of Monday, One World Trade Center is open for business — with the first corporate tenants moving into the country's tallest building 13 years after the September 11 attacks.

Tenants who are getting a lot of name-checks in coverage of the opening.

CNBC: "Anchor tenant Conde Nast moving in today. The media giant will occupy floors 20 to 44, with the first wave of 175 employees arriving at their new offices."

There are a couple reasons for that. The first is the obvious fact that they're the first company moving in, but the second is more nuanced.

The New York Times says Conde Nast has played the role of trailblazer before when it comes to reinventing neighborhoods. Where lower Manhattan was once dominated by financial institutions, it is now shifting to a more commercial and residential focus.

But One World Trade Center hasn't been without its pushback: A writer for Quartz argues the building isn't flattering, and failed to live up to early designs. "It is hard to imagine anyone getting worked up over this design. From whatever angle you choose to view it, the edifice says just one thing with any passion: that it exists."

And comedian Chris Rock voiced his own concerns on 'Saturday Night Live' over the weekend, in a somewhat controversial monologue.

CHRIS ROCK VIA NBC / 'SATURDAY NIGHT LIVE': "They should change the name from the Freedom Tower to the Never Going in There Tower, because I'm never going in there ... In the same spot? They put another skyscraper in the same spot?"

They did change the name, from the Freedom Tower in 2003, to the current One World Trade Center, in 2009, but The Wall Street Journal points out there's been enduring confusion over the name.

Although the building is open to its corporate tenants, the observation deck still won't be open until the spring.