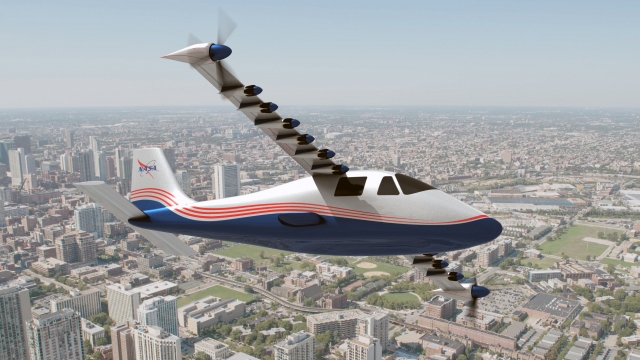 Electric flight is still a mostly experimental market — but NASA's re-energized X-plane program could help boost the technology toward regular use.

X-57 is its latest prototype, and its design direction seems to be "just add more propellers." NASA has a specific name for it: distributed electric propulsion.

NASA will give a production aircraft skinnier wings and stick six electric engines on the leading edge of each one and one on each wing tip.

Tests have shown the distributed system can generate better lift than traditional engines at low speeds, like those experienced during takeoff and landing.

And electric motors are typically quieter than combustion versions — even with lots of props going.

But most of all, it's really efficient.

"The aircraft that we're designing right now and taking to a flight demonstrator can use five times less energy than the best general-aviation aircraft out on the market today," said NASA's Mark Moore.

Fuel-burning planes make a tradeoff between speed and fuel efficiency, thanks to things like drag and the changing weight of their fuel. It means they don't always travel as fast as they're designed to. NASA says an electric plane could cruise closer to its design limits.

But electric power will probably stay limited to small planes for now. Batteries are heavy and need time to charge, so it's harder for larger aircraft to get the same benefits.

So don't expect a bunch of electric propellers to replace the big turbines on your next long-haul flight — at least not yet.