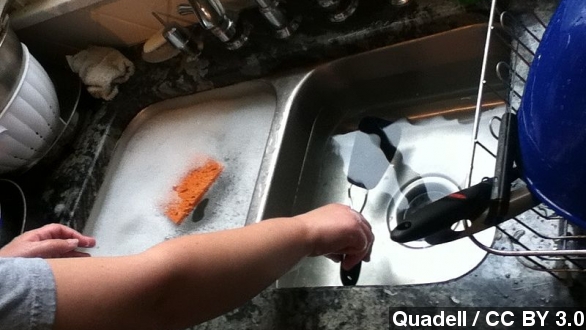 There are plenty of reasons to love dishwashers. There’s the convenience, of course. And, well, it works. (Video via Cascade)

Then again, dishwashers might work too well. A study published in the journal “Pediatrics” suggests kids whose families wash dishes by hand are actually less likely to develop allergies.

That’s because hand washing, in general, can be less effective than machine washing.

“Which in its simplest terms states that the rise in allergy and asthma is an unintended consequence of modern hygiene,” explains Dr. Home Boushey of the University of California-San Francisco.

In other words, we’re too clean, people!

“The modern world has become so clean that it’s deprived us of contact with microorganisms that we co-evolved with, that have always been with human beings,” Dr. Charles Raison of Emory School of Medicine said in a 2010 video.

The thinking goes — kids need some exposure to bacteria to build up their immune systems. (Video via Raising Arizona Kids)

It’s a theory that’s gained a lot of traction in recent years. But it is just a theory. (Video via euronews)

And one that has its competing opinions — with researchers disagreeing about what kinds of microbes we should be exposed to.

Still — this latest study in the journal Pediatrics doesn’t get into all that. It merely found — through a questionnaire of the families of more than 1,000 children — that dishwashing by hand was linked to a lower risk of allergy development.