One Photographer Is Sick Of Your Wedding Cell Phone Pics 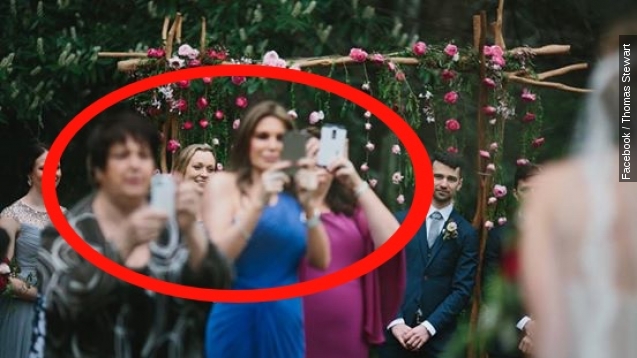 Wedding ceremonies are supposed to be a beautiful and magical moment in a couple's relationship. Want to know how to ruin the moment? Try and capture it on a tiny cell phone screen.

This public service announcement is brought to you by Australian wedding photographer Thomas Stewart, who shot this photo during an outdoor wedding in New South Wales. There's the bride walking down the aisle, there's the groom craning his neck to see her, and there's the peanut gallery crowding the aisle with their cellphones.

In an impassioned Facebook plea that has since gone viral, Stewart argues brides and grooms should always hold an unplugged wedding, and ask their guests to turn off their phones during the ceremony.

He doesn't call out specific guests for their behavior, but says the mass use of cell phones at weddings can disrupt the ceremony, mess with the professional photographer and ruin the magic of the moment. Plus, the pictures probably won't come out that great anyway.

Stewart told Newsy "I see this type of behavior at 70% of weddings, literally every wedding where the guests aren't specifically told no technology. ... The bride in hindsight wishes she'd made this explicit request." He also said he's going to start recommending unplugged weddings to all his clients in the future.