One Person, One Vote? The Supreme Court Might Disagree 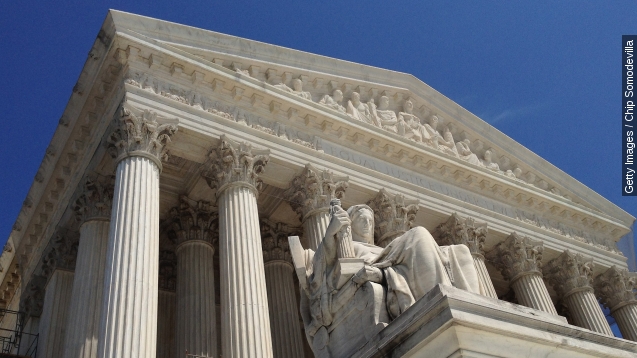 One person One vote — it's a cornerstone of American democracy, but a surprisingly thorny concept the Supreme Court is set to rule on this year in a decision that could have a huge effect on the voting power of hispanics.

The case is Evenwel v. Abbott, and it has to do with how states draw legislative districts. Cities get small districts, rural areas get big districts, but each must have the same amount of people. If one district had less people than another, votes there would carry more weight — violating the principle that every person's vote should matter the same.

But here's the problem: Who counts as a "person?" Conservatives, who engineered the lawsuit, think you should only count U.S. citizens of voting age when drawing districts — basically, all potential voters. The other side thinks districts should be drawn so they contain an equal amount of people — regardless of how many of those people can vote.

It's a huge question in cities like Dallas and Houston, where close to 50% of the adult population aren't citizens. To count them would increase the power of the Democratic areas where they live at the expense of Republican suburbs and rural areas north of the border. (Video via CBS)

The choice — between counting total population or just eligible voters — has traditionally been left to states. The Supreme Court surprised legal analysts by taking the case, which might signal that the days of counting "total population" are numbered. (Video via CNN)

"When you look at total population, it tends to overrepresent certain ethnic groups and they say that sort of consideration should not come into the drawing of district boundaries," Pete Williams said.

Liberals, meanwhile argue "total population" is what's traditionally been used, and elected officials represent all members of their district — including people under 18 and, yes, undocumented immigrants.

At any rate, the two sides will have plenty of time to slug it out before it heads to Court. The Justices will hear the case in the fall.