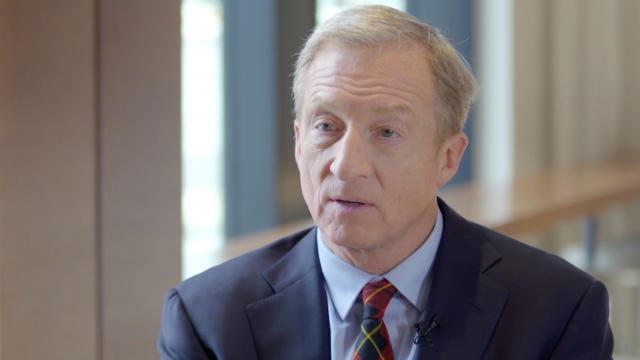 "Really when I talk about the climate crisis, we're talking about rebuilding America and really reimagining ourselves back to being the moral leaders of the world again," said Tom Steyer.

Billionaire investor turned Democratic presidential candidate Tom Steyer says his campaign message is bigger than just climate change. He's aiming to take on the issue of climate justice with a $250 billion plan that he says would empower communities to make clean energy improvements and create jobs.

"I've always started with leadership from the communities where you cannot breathe without getting asthma or drink the tap water without getting sick," Steyer said. "Overwhelmingly black and brown communities. And I've said, look, we're going to have to rebuild America on an accelerated basis. Make ourselves sustainable. That's going to be the biggest job program in American history. So why am I surging? Because people are realizing, look, this guy is different. He's actually talking about what's going on in the United States now."

The message he says is catching on with voters. The Steyer campaign points to some polls that show him surging in early voting states. His campaign has also invested heavily in the states of Nevada and South Carolina where he's seen his support increase. But most surveys show him far behind leading candidates like Joe Biden. "We can't let Trump win," said Joe Biden.  And Senators Bernie Sanders and Elizabeth Warren.

Before he decided to run for president, the California Democrat and political novice was perhaps best known as the impeachment guy on your TV with ads like this

"It's why I'm funding this effort to raise our voices together and demand that elected officials take a stand on impeachment," Steyer said during an ad.

He says he's ready to take on President Donald Trump in a head to head matchup. But many have criticized the presence of billionaires in the 2020 race.

"It is a problem that we now have an overall campaign for the 2020 presidency that has more billionaires in it than black people," said former Democratic presidential candidate Sen. Cory Booker.

Steyer previously pledged to spend $100 million of his own money to campaign for President and former New York City mayor Mike Bloomberg has already spent at least $248 million on his campaign so far.

Is that fair that you can self fund [and] use some of your own money [and] Mike Bloomberg as well, to the other candidates and the other people in the process?

"Does the money matter, some, but it's not nearly as important as message," Steyer said. " I personally believe in looking people in the eye. I've personally registered people gone door to door, do all that stuff. And that's what we're doing in this campaign, really."

And even if he's not successful, Steyer, who's been a mega donor to Democrats for years, says he will continue to support progressive leaning causes and candidates.

Would you financially support whomever becomes the nominee if it's not you?

"Absolutely. Look, and let me say this. I said I've started one of the biggest grassroots organizations, the United States Next Gen did the biggest youth voter mobilization in American history in 2018." Steyer told Newsy. "Are there some challenges? Sure, but we're fighting for something that's absolutely fantastic and we're trying to avoid a crisis that would be devastating."