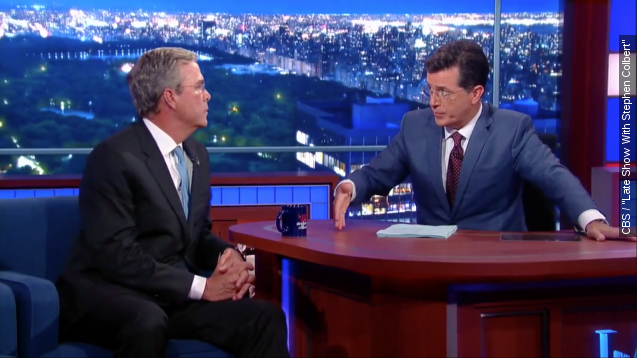 SMS
One Of The Colbert 'Late Show' Debut's Best Parts Didn't Air
By Sebastian Martinez
By Sebastian Martinez
September 9, 2015
One of the best ideas of what Stephen Colbert's "Late Show" will look like didn't come from the debut itself, but from an online clip that didn't air.
SHOW TRANSCRIPT

One of the best parts of Stephen Colbert's debut as "Late Show" host didn't even air.

Colbert asked Jeb Bush a serious question about gun control, sent in by a raffle winner.

Colbert asked, "A well-organized minority has stymied all progress, and almost weekly we see the deadly consequences. How do you square this with real democracy and what are you prepared to do about it?"

And Bush gave a real answer.

"I think you do it at a state-by-state level. This is the greatness of our country," Bush said.

Colbert asked, "Well, the right to have an individual firearm to protect yourself is a national document: the Constitution. So shouldn't the way that be applied also be national?"

On "The Colbert Report," that would've gone more like this.

Jimmy Fallon slow-jammed, "What makes you think you've got what it takes to go all the way?"

"Well in my two terms as governor, I cut taxes every year," Bush slow-jammed in response.

Some expect Colbert to be more incisive than his rivals when it comes to politics.

"It sounds like he's going to be a more serious late-night host, in the same way Letterman was," CNN's Brian Stelter posited.

But the cut segment wasn't all serious.

"What we've done is that we've written up an answer here that's just a little bit Trumpier," Colbert said.

And he made Bush say this:

"I promise to put Meatloaf on the $10 bill and give Lil Jon a cabinet position, which will send the message that this great nation will never turn down for what," Bush said.