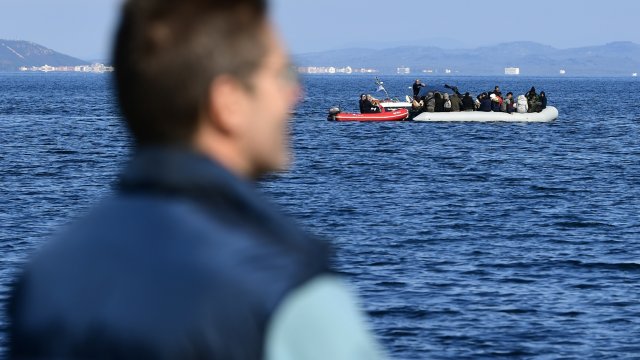 SMS
Child Dies As Migrants Try To Cross Greece-Turkey Border
By Austin Kim
By Austin Kim
March 2, 2020
A child drowned while trying to cross into Greece from Turkey after the Turkish government said it would allow migrants to cross into Europe.
SHOW TRANSCRIPT

One migrant child has died as thousands of refugees tried to cross into Greece from Turkey over the weekend.

Greek Authorities say the child was one of 48 people on a small boat trying to make a sea crossing into Greece. The young boy drowned after the boat capsized near the Greek island of Lesbos. The rest of the group was rescued.

It's the first death since Turkey announced it would relax its border control, allowing refugees to attempt to enter Europe. It came as violence escalated between Syrian rebels and Russian-backed Syrian government forces. That violence forced Syrians to flee to Turkey, which already hosts 3.5 million migrants.

Some refugees have fled north toward Greece. They clashed with Greek border patrol, as refugees threw rocks while border officials fired tear gas. Greece said it will suspend asylum applications.

Turkish President Recep Tayyip Erdogan defended his decision to allow migrants to cross into Europe, saying the EU must "share the burden" of hosting Syrian refugees.

Contains footage from CNN. Additional reporting from Costas Kantouris and Elena Becatorios of the Associated Press.