One Man's Battle With COVID Leads To New Mission In Life 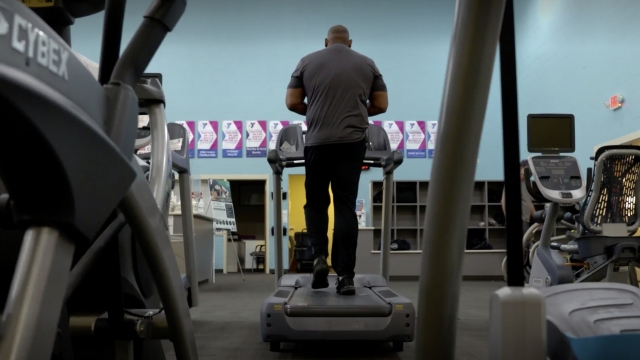 SMS
One Man's Battle With COVID Leads To New Mission In Life
By Amber Strong
By Amber Strong
February 7, 2022
The pandemic is highlighting health disparities that exist between men and women and among different races, particularly Black men.

Gary Brown is as healthy as they come these days, but that wasn't the case two years ago.

"There were days where I can only get to 15 minutes and I had to call it quits," Brown said about using a treadmill.

It started with what he thought was a cold, then more symptoms came.

"Night sweats, fatigue, a lot of coughing and things of that nature," Brown said. "Insomnia — sometimes where I would go two or three days without even sleeping."

Brown's journey with COVID-19 came in March of 2020 — long before there was a vaccine and as the world was still getting to know the virus that would claim more than 875,000 lives nationwide.

"There were days when I was in so much pain that I said, Lord, if it's your will take me," Brown said.

Though Brown eventually recovered, he continued to suffer with long-haul symptoms for months.

"If I get through this, I need to take my health more seriously, and I said, 'I know I'm gonna need help from you,' so that was that was my prayer," Brown said.

The longtime trainer and wellness director says he knew how to be healthier but wasn't living up to it — avoiding his diabetes medication and doctor's appointments, and consuming unhealthy food.

Now he's changed his lifestyle and is encouraging anyone who will listen to make changes within their power, especially fellow Black men.

"I don't know if it's just drilled in our heads that we're Black men, we are the provider of the house with the head of the house," Brown said. "We take care of everybody else, and we forget about ourselves.”

Men in general are more likely to die from COVID-19 than women.

According to the CDC, life expectancy has dropped to its lowest point since 2003 thanks to the pandemic, and the hardest-hit group is Hispanic and Black men, declining 3.7 years for Hispanic males and 3.3 for Black males.

African Americans account for a high percentage of diabetes, obesity and sickle cell disease — all underlying conditions tied to severe cases of COVID-19.

It's called a syndemic, where "two or more epidemics interacting" have "exacerbating health consequences." In a study published in the Surgeon General's Public Health Reports, researchers describing the high rate of COVID-19 deaths among Black men said, "The immune responses associated with being obese and having hypertension are activated and exacerbated by chronic stress and biological aging processes that are rooted in structural racism."

"No. 1, do you have access to quality health care?" said Dr. Cedrek McFadden, an advocate for Black men's health. "Do you have the ability to get off from work to go to the doctor? Do you have paid sick time off if you live in a space where you don't have access to public transportation?"

Experts say social determinants of health, like access to health care, healthy food and even the job you work, may be a good indicator of how well someone will battle something like COVID-19.

"Studies have shown that when we get rid of some of those barriers ... some of those social determinants of health, and we create sort of a level playing ground, that we can see improved outcomes," McFadden said. "We see it in colorectal cancer when patients are actually offered the same treatment that their White counterparts are receiving, that their outcomes are improved."

Brown says his gym is in the middle of a food desert, and many of his clients are minorities and senior citizens, so he knows it's an uphill battle when fighting a societal issue.

Still, he says he's doing his part to encourage anyone who walks through those doors, recommending affordable food alternatives, exercise and even helping them navigate the health care system.