One Former Afghan Interpreter Shares His Harrowing Escape To The U.S. 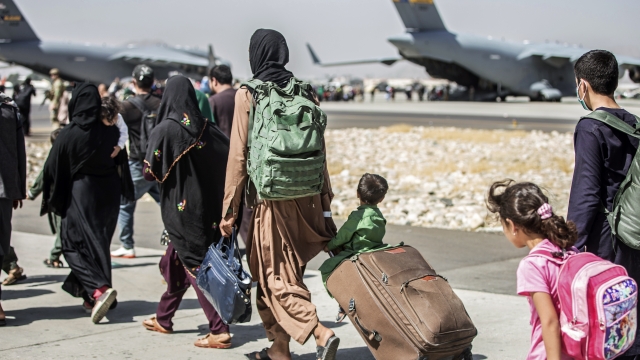 SMS
One Former Afghan Interpreter Shares His Harrowing Escape To The U.S.
By Ben Schamisso
By Ben Schamisso
August 25, 2021
Even with a visa, Khan spent two excruciating days inside a packed and sweltering U.S. base in Qatar with his wife and son before catching a flight.
SHOW TRANSCRIPT

"When we reached the United States, when we saw the hospitality, the humanity of people, we were really impressed by them," the former interpreter said. "It's just like a dream for us."

Newsy is blurring his face and distorting his voice to protect his parents and siblings still in Afghanistan.

A former interpreter for the U.S. military, Khan picked up his special immigrant visa the day before the Taliban captured Kabul.

The family had commercial flight tickets to the U.S. three days later. But by then, the Kabul airport had become nearly impossible to get into.

On the third day, airport security fired into the air to disperse the crowd. Khan saw an opportunity.

"I took advantage of the crisis and I go forward without my wife and son," he said.

Khan reached the airport gate and showed his family's visas to U.S. soldiers. Soon after, they all got onto a military plane.

Even with a visa, Khan had to go through a harrowing journey to reach freedom.

The Pentagon says nearly 90,000 people have been evacuated by the U.S. and its allies. But for tens of thousands of other Afghans, similar chances of escaping are diminishing by the day.

President Biden said, "The sooner we can finish the better. Each day of operations brings added risk to our troops."

On Tuesday the president said he's sticking to his Aug. 31 deadline for completing airlifts of Americans and at-risk Afghans.

But critics say that's not enough time, especially for vulnerable Afghans whose visas have not yet been processed.

"The situation on the ground is growing more dire by the hour," U.S. veteran Chris Franco said.

He has been trying for years to bring home the interpreters he served with in Afghanistan.

“The likelihood of them being left behind is growing considerably each day with the challenges that folks are facing on the ground with Taliban checkpoints, with folks being turned back, with having to destroy their own documents for fear of being captured by the Taliban en route to the airport," Franco said.

As for Khan's family, they spent two excruciating days inside a packed and sweltering U.S. base in Qatar before catching a flight to the U.S.

He said, "There were more than 1000 people in one hall. And there were no bedding facilities for sleeping."

They are now staying with relatives in Houston and will soon move into their own home.

"We are very hopeful, we are very happy," Khan said. "There is not any pressure on our mind."