A Year After The Deadly Camp Fire, Paradise Is Still Cleaning Up 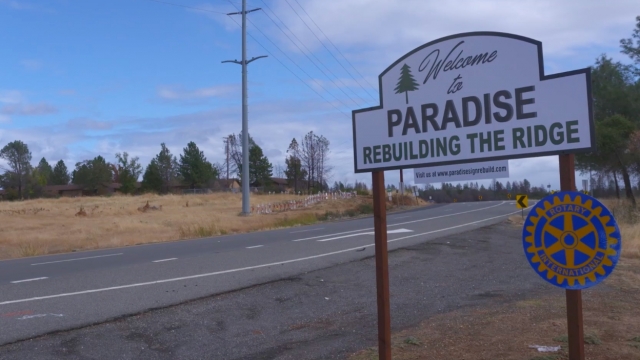 SMS
A Year After The Deadly Camp Fire, Paradise Is Still Cleaning Up
By Lindsey Theis
By Lindsey Theis
November 5, 2019
One year on, Paradise California is still cleaning up after the state's deadliest fire. Rebuilding will take longer still.
SHOW TRANSCRIPT

It's been a year of nonstop work so far as Paradise, California, is slowly getting rebuilt as the anniversary of the state's deadliest wildfire nears. Nearly the entire town has to be reconstructed — and some residents could have their lives disrupted for years to come.

More than 180 businesses have opened their doors in the year since the Camp Fire. Nic’s is one of them. At first, the debris crews helped to keep the town’s economy afloat. Owner Nicky Jones is employing 15 workers; all but one were displaced in the fire. 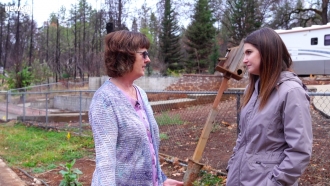 "The biggest challenge is timing because there so many people wanting to rebuild so it takes a little longer to get maybe plans through plan check," Jones said.

"My family lost 13 homes and for them to be able to have a place to come back to and to see me to be a part of the rebuild process personally is just a really big accomplishment," April Kelly, Nic's manager said.

Rebuilding an entire town takes an enormous amount of work and money. Crews have cleared more than 3.6 million tons of debris, including 660,000 tons of contaminated soil. That's nearly double what crews removed from the World Trade Center after 9/11. The Camp Fire was caused by utility equipment owned by Pacific Gas and Electric, which has agreed to pay billions in damage claims. Some Paradise residents have chosen to pay for cleanup work themselves or use their homeowners’  insurance.

Water, septic, and electric lines have to be replaced. Building plans have to be approved, and to tougher standards than before the fire. The town has passed lots of new fire safety measures, regulating how far shrubs and trees are planted apart, or the distance between wooden fences and a house. To date more than 10,000 properties have been cleared of debris, but less than a dozen homes have been rebuilt and occupied.

"I'm currently in my eighth habitat since the fire," Stacey Crook, who lost her home in the Camp Fire said. "I think I'm going back to lower Paradise where the fire did not you know take over the homes. I like paradise. I like the people the community. It's not, yes, the trees and the topography are all wonderful, but it's the people that make paradise. The community."

With rebuilding comes new infrastructure like fiber internet, a sewer system, and buried electrical lines. But with that, some worry about gentrification and former residents getting priced out of what was a pretty affordable part of California.

What’s left behind is a new population of homeless residents. Margie Hensley, who runs the small nonprofit Hope Center, says they’re still meeting basic needs like water and clothing. They grew from 6 to 25 employees, and acquired two warehouse spaces to do so. 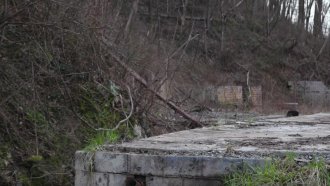 "A lot of the, the older generation that have come through the doors, won't be rebuilding. Won't be coming back," she said.

"When it comes to localized impact and really specific devastation to a localized group of communities, Paradise in particular but certainly some of the surrounding communities, it really is unprecedented," Robert Troy, FEMA Recovery Director told Newsy.

Back at Nic’s, Jones says the customer base is slowly shifting from cleanup crews to locals. Kitchen manager Joe Pickett lost his home in the Camp Fire. He says this gives him hope, because any progress...is something.

"We were all distraught and all just running for our lives for a moment. I don't want people to be scared to come back. I want them to come back," he said.