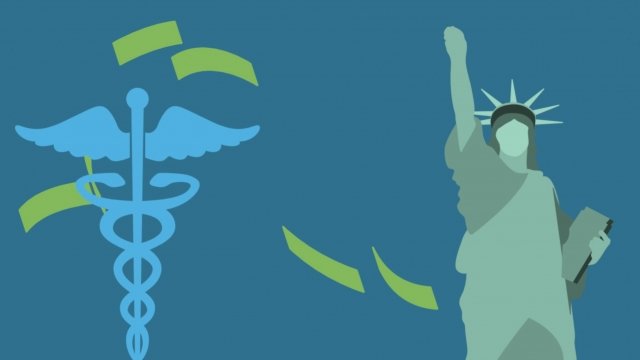 The United States spends $3 trillion a year on health care: That's the highest of any other wealthy nation. That includes $672 billion a year in Medicare, $565 billion in Medicaid, $329 billion the pharmaceutical industry pulls in and $1 trillion that goes to hospitals.

And most people agree our current health care system isn't working. But when lawmakers concentrate on Obamacare or pharma industry regulations, they could be missing a huge opportunity to fix it all. And some of them really, really won't like this option. (Looking at you, Speaker Ryan.)

"How healthy people turn out to be is pretty strongly correlated to what we consider social conditions," David H. Freedman, Politico contributor and contributing editor at The Atlantic, told Newsy.

For years, researchers have found spending more on things like better education, subsidized housing and food assistance can help mitigate health issues before they get so bad, you have to go to the hospital. In public health lingo, those are called "social determinants of health" — things every American deals with in some way.

It takes a much broader look at what health care means. If the government invests more on the front end to make sure people have a better quality of life, we would end up spending less on health care. Think of it like this: The country is a boat. Upstream from the USS America are the social determinants of health. If we keep looking and fixing those things further ahead, we might not have to keep throwing so much money to fix things after issues arise.

Lawmakers have been reluctant to sign onto this theory in the past because measuring the health benefits of social programs has been hard. But that's changing.

"That proof is getting a lot better now. There are a lot of organizations that are making a lot of effort to run programs where things are carefully measured and so we can get some results in a reasonably short time frame that makes it pretty clear that this stuff works," Freedman said.

Cities like Los Angeles; Chicago; Louisville, Kentucky; and Portland, Oregon, have run programs that work to prove the theory, and each found the theory plays out. But, those programs have been in a "closed system." That means the county or city controls both the health care and the social programs.

"The local governments are taking some of the money they used to spend on health care, and they are shifting it to put it into, for example, better housing for the needy. And then they can see what happens to their health care cost. Sometimes within a year and certainly within a few years, the health care cost starts to drop significantly based on these investments," Freedman said.

But our health care system isn't set up that way. At all. So to make this work, there would need to be huge buy-in and a lot of change.

"You need a closed system where the same organization, say for example a government agency that is investing in the social conditions, is also in a position to provide the health care. It's hard to set up; it's very, very hard on the federal level," Freedman said.