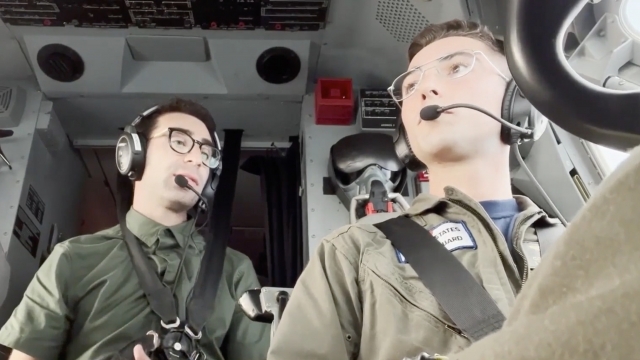 U.S. Coast Guards are patrolling the vast ocean, looking for migrants 1,500 feet above the Florida straits.

NEWSY'S BEN SCHAMISSO: On a five-hour flight like this one, what are the chances that you are going to find some migrant boats?

LT. CONNOR HOEHLE: We could find two to three, three to four today, so it's definitely always been a busy area. It's just gotten noticeably busier.

Newsy recently embedded with a crew from Miami tasked with surveilling the sea passage between the U.S., Cuba and the Bahamas. A couple of hours into the flight, the Coast Guard recorded a spotting, and down below, on rescue boats, their colleagues took action.

The migrants attempting the treacherous and days-long journey to Florida mostly come from Cuba and Haiti.

Seeking to escape poverty, violence and persecution, they are taking to the sea in record numbers. The U.S. Coast Guard says it has intercepted over 13,000 Haitians and Cubans this year — the most in nearly three decades.

For the migrants, being caught in the ocean can be a blessing and a curse. Their lives are often saved, but they are also typically sent back home within a week.

"Even if it's back to Cuba, they're going home to their loved ones, and they're not lost at sea," said Nicole Groll, petty officer with the U.S. Coast Guard.

Those who make it to land may face different outcomes. Some are allowed to stay while their claims of asylum are heard.

Haitian immigrant Lyly made it to Florida by sea in August 2021. The 28-year-old, who volunteered for the late Haitian president Jovenel Moïse, says he was twice attacked and threatened at gun point by a rival political faction.

Lyly says he heard about a smuggling operation from a friend and boarded a boat with 40 other Haitians. Four days later, they swam to shore near Miami and were arrested by border authorities.

After a month in federal detention, Lyly was released by ICE on parole.

Today, he's waiting for a decision on his asylum case – a process that can take years. In the meantime, he receives help from a refugee resettlement organization called Church World Service.

David Claros, a Church World regional director, says people taking to the sea speaks volumes about the worsening conditions they face at home.

"I would like people to think, what would it take for you to decide, 'I have to go. I don't care if I die. I have to leave this place,'" Claros said.

Haiti, the poorest country in the Western hemisphere, is still reeling from the assassination of President Moïse last year. Gang violence, street protests and a cholera outbreak are bringing the country to a breaking point.

In Cuba, the authoritarian government is struggling to recover from a deep economic crisis, while continuing to crack down on political dissidents.

Out at sea, Lt. Hoehle says he and his colleagues think of their mission as a humanitarian one. Though technically their job is to prevent unauthorized migration, they say their goal is to save lives.

"Those are people down there that in some sort of desperate situation," Lt. Hoehle said. "We're just looking out for their safety at sea."