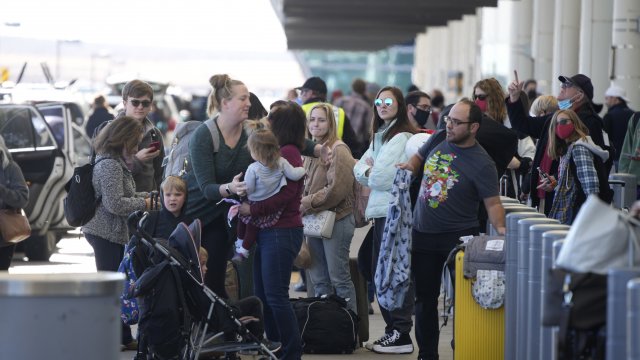 Holiday plans were marked by travel woes that continued into the week after a weekend of flight delays and cancellations.

There were at least 14,000 flight delays and at least 3,100 flight cancellations globally Monday, according to flight tracker FlightAware.

"Merry Christmas! it's a hassle but we're here and we're healthy so what the heck," said Midge Fatheree.

Fatheree said her flight home to Cincinnati after a trip to see family was among around two dozen canceled in Tampa. That represented less than 5% of planned flights for the day, though Flight Aware showed nearly a quarter of flights delayed form the airport.

"I just retired last Wednesday so I'm not really that overly concerned but a lot of people were. It was a full flight and everybody had to go get back to the airline desk and rebook and it's just gotta be a mess. I lucked out I got on my phone and got another flight," said Fatheree.

While some families found flights unchanged, others dealing with delays and cancellations stayed positive about staying in Florida a little longer.

"Home is Bismark, ND and it's about 8 below and it's snowing there right now so staying here another day isn't such a terrible thing," said traveler Toby Schweitzer, dealing with a canceled flight.

Major airlines blamed winter weather and the Omicron variant for the disruptions. Delta, United, American Airlines and JetBlue all cited Omicron or COVID.

"We're still right in the middle of this Omicron variant and this is going to be lasting for a while so we're expecting incremental either it's traffic volume or incremental airline delays that's going to last not just through New Years but probably well into January and maybe even beyond," said Andrew Gross, a spokesperson for AAA.

While some airlines deal with staffing impacts from COVID, the CDC shortened quarantine and isolation guidance Monday.

Some airlines previously asked the agency to reconsider its isolation guidance.

JetBlue previously stated of guidance for fully vaccinated people who test positive and recover, "Swift and safe adjustments by the CDC would alleviate at least some of the staffing pressures and set up airlines to help millions of travelers returning from their holidays."

Monday night, Delta said it was working to implement the update, explaining it allows more flexibility.

"This is a safe, science-based and more practical approach based on what we now know about the omicron variant. This new variant has quickly replaced B.1.617.2 as the dominant variant in the U.S. We're learning that while Omicron is highly contagious, is also involves a shorter duration of illness and a shorter contagious period compared to previous strains," stated Delta Chief Health Officer Dr. Henry Ting.

Precautions were not lost on travelers.

"I feel like this is usual holiday season. I'm sure things are heightened more with holiday season but they're still taking all the precautions they need to make sure people are tested before they get on these international flights so that definitely makes me feel a lot better about it," said Maniha Khan, who had a flight delay.