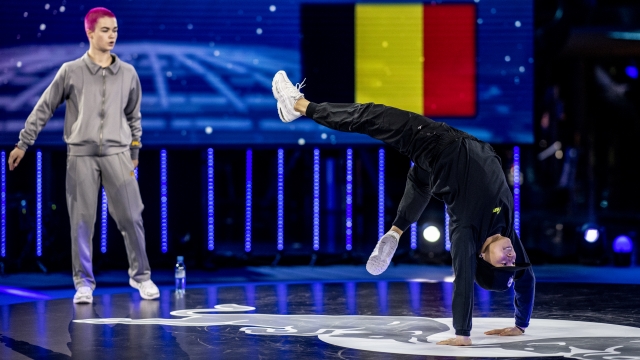 SMS
Break Dancing To Get Its Time In The Spotlight At The Olympics
By Katherine Biek
By Katherine Biek
December 8, 2020
Two break dancers told Newsy they're excited about the International Olympic Committee adding breaking as a sport for the 2024 Games in Paris.
SHOW TRANSCRIPT

For years, the only exposure many people have had to the world of break dancing is movies like "Breakin'," "Beat Street," "You Got Served" and every single "Step Up" film ever released.

But the sport will soon get more time in the spotlight: The International Olympic Committee voted to add breaking to its roster of events for the 2024 Games in Paris.

Sunny Choi: "Breaking really started in the streets and has always been pretty underground. So for it to be internationally accepted and in the Olympics, of all places, it really was a complete surprise. So exciting because I think that's going to open so many opportunities for dancers around the world."

Philip Svirshch: "I think it will give appreciation to this culture and dance from a lot of people."

Sunny Choi and Philip Svirshch were the only Americans selected to compete at the 2020 Red Bull BC One World Final in November.

It featured eight men and eight women battling one-on-one to showcase the best breakers in the world.

The origins of breaking date back to the 1970s on the streets of New York — and the first global contest was in 1990. Today — movies, music videos and competitions like Red Bull's continue to bring international recognition to the dance style. There are active communities of "B-Boys" and "B-Girls" all over the world.

Svirshch: "It is so free and there really are no rules. You can truly be yourself — who you want to be. … You can really show who you are, show your character, your style. And I love that about it."

Svirshch and Choi were both gymnasts before they took up breaking. Choi didn't even set foot on a dance floor until she was in college.

Choi: "In some ways I was totally behind. You know, gymnastics has a very structured way of thinking. And so creativity had never really played a part in that in those years."

But breaking is still a male-dominated space. Red Bull started its international championship back in 2004. Yet, it took until 2018 for designated B-Girl battles to be added to the lineup.

Choi: "The majority of the time I actually do battle guys because there aren't that many B-Girls, particularly in the U.S., actually. So basically my whole career I've been battling guys, and more recently I've been doing these larger competitions that are B-Girl-only."

Choi hopes the addition of break dancing to the 2024 Olympic Games will inspire more people — especially girls — to learn the dance style.

The International Olympic Committee previously said adding breaking as a sport fits with its goal of making the games "gender-balanced, more youth-focused and more urban." It also hopes breaking will draw in a younger audience.

That's because the average Olympic viewer is getting older. Nielsen found the median age of people who watched the last Summer Games in 2016 was 53 — up from age 45 in 2000.

Olympic organizers already gave breaking a test run at the 2018 Youth Games to much success. The battles drew large in-person crowds and helped make 2018 "the most digitally consumed Youth Games ever."

Svirshch: "I think a lot of people are going to really catch on to it, especially with being in the Olympics and stuff. … We don't have restrictions on anybody. We don't tell people no. Like, everyone is welcome here."