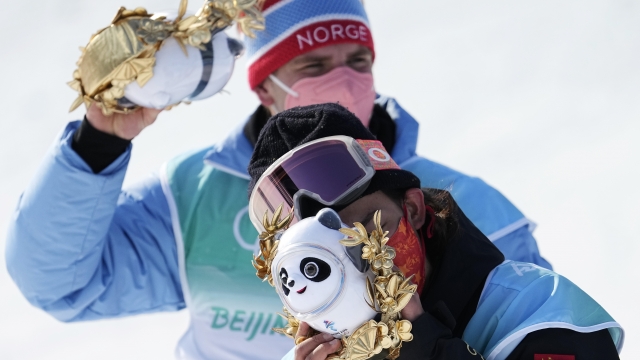 SMS
Olympic Fans Race To Buy Panda Mascot
By Meg Hilling
By Meg Hilling
February 15, 2022
The stuffed panda is rapidly selling out, and police are cracking down on higher priced resales.

Olympics fans in Beijing are lining up for blocks, but not for any athlete.

As the winter games wrap up, fans are racing to get their hands on the fluffy Olympic mascot that is rapidly selling out.

As the lines grow outside Olympic merchandise shops, employees with speakers and signs warn shoppers of limited inventory and one per customer rules, but that hasn't deterred shoppers from coming back each day to try.

One man says he stood in line for two hours to buy one for his child with no luck, but he plans to try again tomorrow.

And it isn't just parents trying to buy the panda for their kids. Some adults are trying to purchase it for themselves as a memento from the games or as a favor for others.

The panda costs about $30. Police have reportedly begun cracking down on folks trying to resell it for more, in some cases as much as 10 times the retail price.

Unfortunately, those who have purchased one via presale order will not receive their panda until after the winter games have ended. The Associated Press reports that some factories that make the panda called workers back early from their lunar new year celebrations in order to make more, but authorities say not to worry, as an adequate supply of the panda and other Olympic souvenirs will be on sale through June.

But if you can't wait that long for the panda, the mascot for the winter Paralympics, a stuffed red lantern named Shuey Rhon Rhon, is already available for purchase.