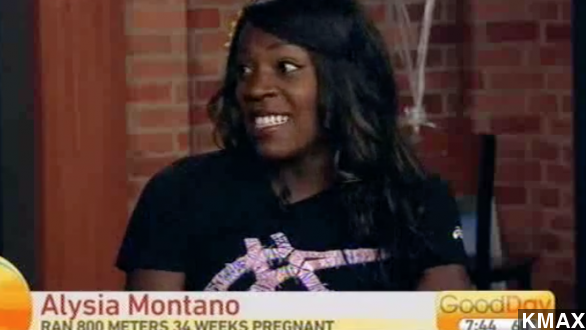 Finishing a championship race dead last might be disappointing for most track and field Olympians, but this runner is being called inspirational. That's because she's just six weeks away from her due date.

Four-time U.S. champion Alysia Montano says she knew she wouldn't qualify for the next round Thursday but wanted to take a stand for professional female athletes. (Via KMAX)

NBC reports Montano received a standing ovation when completing the 800-meter race in about two and a half minutes, only about 30 seconds behind the first-place finisher.

The 28-year-old runner tweeted, "Thanks ... for acknowledging women who can be fit while pregnant, continue their careers and pursue having a family."

Social media has been abuzz with people wondering whether it's safe for her to compete while she's pregnant.

Montano told NBC and other outlets her doctor and midwife both encouraged her to run, saying it's a perfectly healthy activity for which her body is conditioned.

"I know there's a lot of stigma and really the word is ignorance behind pregnant women and exercising, and the truth is it's good for the mom and the baby." (Via KCBS)

Montano isn't the first to gain recognition for competing in sports during pregnancy. Earlier this year, one expectant mother explains in her blog how she surfed through her nine months of pregnancy. (Via Shesurfs)

This is Montano's first pregnancy. She says her goal is to compete in championships and the 2016 Olympics after giving birth. You can see the amazing footage of her run on the USA Track & Field's website.