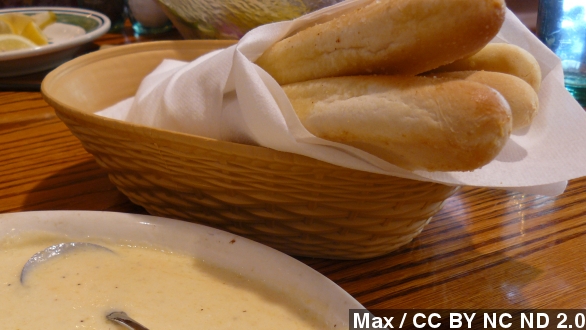 Starboard is aiming to replace the company's board of directors in an effort to raise slumping sales. But as it continues its fight in the boardroom, Starboard has offered up some suggestions for the Olive Garden dining room in the meantime. (Video via Olive Garden)

Though "some" is a bit of an understatement. Fortune reports Starboard laid out a 300-page turnaround plan for Darden-owned Olive Garden.

The headline suggestions include salting the water when cooking pasta, carefully doling out breadsticks and increasing alcohol sales.

Starboard is not impressed by the restaurant's unsalted water. The company wrote, "If you Google 'How to cook pasta,' the first step of Pasta 101 is to salt the water. How does the largest Italian dining concept in the world not salt the water for pasta?"

If less food waste and more authentic pasta don't do the trick, Starboard's next suggestion should. The investor says Olive Garden should place a bigger focus on alcohol sales. Olive Garden's alcohol sales are two times less than other Italian restaurants.

Fortune reminds us Olive Garden has attempted to boost sales. The company announced a Never Ending Pasta Pass on Monday. Between Sept. 22 and Nov. 9, customers can pay $100 to have an unlimited amount of pasta and beverages.

Although we'd venture to guess since Starboard isn't on board with those unlimited breadsticks, they might not be too excited about the potential food waste involved with an unlimited pasta deal.

Starboard says its turnaround plan could save the company $114 million in costs.