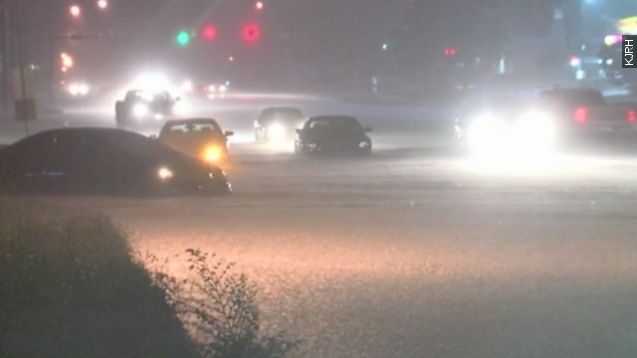 SMS
Oklahoma, Texas Expecting More Rain Amid Treacherous Floods
By Matt Moreno
By Matt Moreno
May 24, 2015
The floods have already killed one Oklahoma firefighter, forced hundreds from their homes and left thousands without power.
SHOW TRANSCRIPT

"What you're seeing right now is a mini van that is down in the water. You can see the water is actually going into the car now," KJRH reports.

Oklahoma and Texas are being hit with heavy rain, causing flooding and power outages throughout the states. And the bad weather may not be over yet.

"That is highway 24 that's probably got a quarter-mile stretch here of water just running over it. It is closed down. ... It's just amazing that this has got this much water here, and we've still got more water coming," KWTV reports.

The flooding in Oklahoma has already cost one Claremore firefighter his life. While attempting a water rescue, the firefighter was swept away and drowned.

"The firefighter stepped into fast moving water and was swept into a storm drain," KOKI reported.

Both northern and southern portions of Texas are dealing with flooding and evacuations, too. As of late Saturday night, some 27,000 customers in the Austin area were without power. (Video via Time Warner Cable News)

Many evacuated their homes after the San Marcos and Blanco rivers flooded.

"It just kept coming and kept coming. We just started loading stuff into the car, possessions that we could," a local resident told KXAN.

As The Weather Channel points out, the area's been hit hard with rain since the beginning of the month.

"You can see the bull's-eye there — 18-24 inches. That's 2 feet of rainfall across the Red River Valley area. No wonder we have problems."

Yet forecasts for many of the affected areas predict more rain Sunday and into the rest of the week.

NBC News reports there have already been more than 1,000 mandatory evacuations in Oklahoma and Texas with more possible as the rain continues.