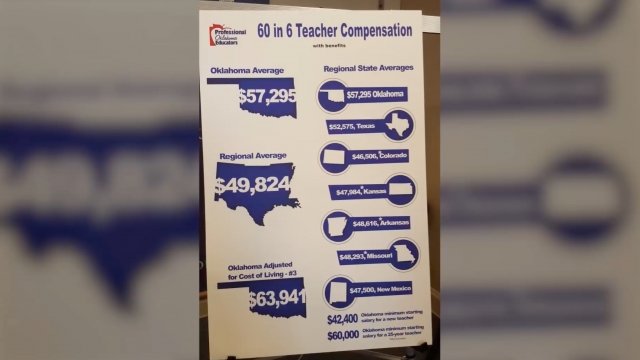 SMS
Raises For Oklahoma Teachers May Not Be Enough To Stop A Strike
By Katie Cammarata
By Katie Cammarata
March 29, 2018
Oklahoma lawmakers approved a $6,100 pay increase for teachers, but the state's teachers union said that might not be enough.
SHOW TRANSCRIPT

Oklahoma lawmakers approved a bill that would increase teachers' pay by $6,100, and the state's governor said she would sign it. But that might not be enough to keep teachers from striking.

The Oklahoma Education Association's president said in a statement that while the bill "is major progress, this investment alone will not undo a decade of neglect." She said educators will "descend on the Capitol" during a walkout Monday.

According to the National Education Association, in 2016, the average salary of teachers in Oklahoma was ranked 49th nationally. Only Mississippi and South Dakota were ranked lower.