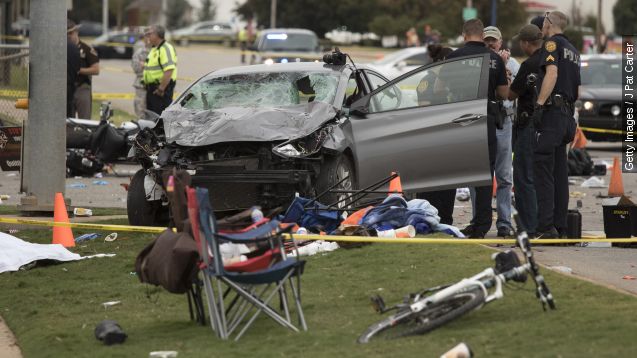 Four people were killed and dozens were injured when a woman drove her car into Oklahoma State University's homecoming parade.

Four people are dead, including a 2-year-old boy, and another 47 are injured after a car barreled into a crowd at the Oklahoma State University homecoming parade.

"I'm never going to forget that in my mind; it's gonna replay over and over," OSU student Kailey Carter said.

Witnesses say the car hit a motorcycle and then plowed into spectators. The car was not part of the parade and was traveling at full speed before hitting the crowd.

Police say the driver, 25-year-old Adacia Chambers, was arrested for driving under the influence shortly after the accident. Her father told The Oklahoman: "This is just not who she is. They're going to paint her into a horrible person but this is not (her). ... My heart goes out to those people and all of them who are injured."

The homecoming game between OSU and the University of Kansas was played as scheduled. There was a moment of silence before kickoff.

This tragedy for the Stillwater community and OSU follows a deadly plane crash in 2011 that killed four people, including the OSU women's basketball coach Kurt Budke and assistant coach Miranda Serna.

"Cowboy family pulls together. Unfortunately we've had to do it before, and we're gonna do it again," Oklahoma State University President Burns Hargis said.

"We'll get through this, but certainly it's a very painful experience for those of us here and certainly for all Oklahomans," Oklahoma Gov. Mary Fallin said.