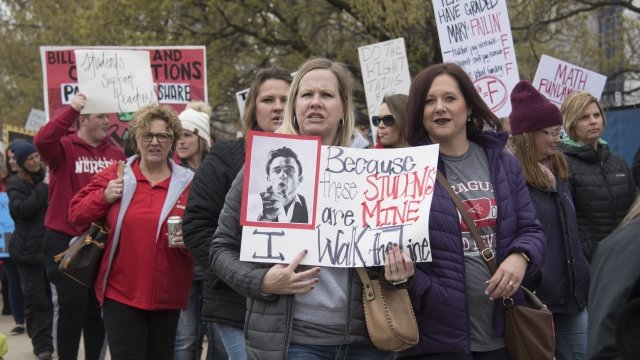 SMS
Oklahoma's Gov. Says Teachers Want More Than The State Can Afford
By Briana Koeneman
By Briana Koeneman
April 4, 2018
In an interview with CBS, Gov. Mary Fallin said, "Teachers want more. But it's kind of like a teenager wanting a better car."
SHOW TRANSCRIPT

Schools across Oklahoma were closed for the third day in a row Wednesday as thousands of teachers continued to rally for pay raises and increased government funding for education.

But Oklahoma's governor says those teachers are asking for more than the state can afford to give them.

In an interview with CBS on Tuesday, Gov. Mary Fallin said, "Teachers want more. But it's kind of like a teenager wanting a better car."

Last week, Fallin signed a bill that increases teachers' salaries by an average of $6,100 and adds an additional $50 million to school funding.

And on Tuesday, she signed another measure that gives a pay bump to school support staff, like janitors and teaching aides.

But many argue those increases are just a drop in the bucket. Teachers are asking for a $10,000 raise for themselves, a $5,000 raise for support staff and $200 million over three years in school funding.

Fallin said in a statement earlier this week Oklahoma can't "neglect other areas of need in the state" when considering pay increases for teachers — areas like corrections and health and human services.