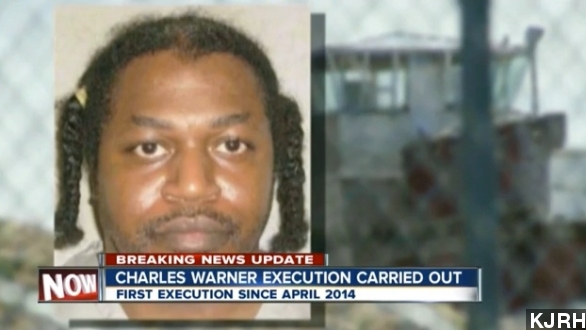 SMS
Oklahoma Executes First Inmate Since Botched One
By Jay Strubberg
By Jay Strubberg
January 16, 2015
Charles Warner, who was convicted of the rape and murder of an 11-month-old baby in 1997, was put to death using lethal injection.
SHOW TRANSCRIPT

The state of Oklahoma carried out its first execution of a death row inmate Thursday since a botched lethal injection last spring.

Forty-seven-year-old Charles Warner was put to death after receiving a lethal mixture of drugs. He was convicted of the rape and murder of an 11-month-old baby.

According to The New York Times, Warner received a heavier dose of drugs than the mismanaged execution of Clayton Lockett last year.

Sean Murphy of the Associated Press read aloud to reporters some of Warner's final words, who described the execution itself as painful.

Warner was originally supposed to be executed the same day as Lockett was last April. But Warner's was delayed after the drugs administered to Lockett caused him to writhe in pain for more than 40 minutes in a botched procedure that drew heavy criticism.

Warner's execution was also delayed Thursday until the Supreme Court voted in a last-minute decision to deny his request for a stay.

Though, in an interview last year, the mother of the victim said the opposite.

"If they truly want to honor me, they will do away with the death penalty for him. ... I don't see any justice in just sentencing someone to die. That would dishonor my daughter. It would dishonor me and everything that I believe in," Shonda Waller, the mother of the slain 11-month-old baby said.