OKC Thunder's Coaching Gig Is A Dream Job (Or A Nightmare) 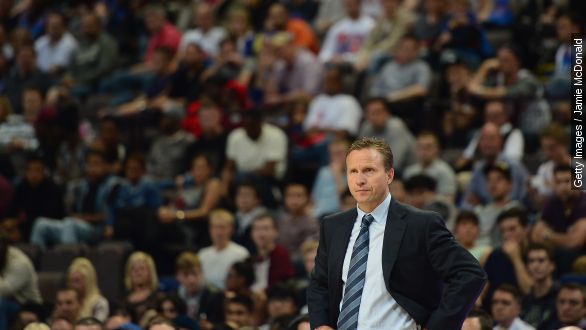 SMS
OKC Thunder's Coaching Gig Is A Dream Job (Or A Nightmare)
By Jamal Andress
By Jamal Andress
April 22, 2015
The Oklahoma City Thunder coaching job may be one of the best opportunities in the league but it could also go horribly wrong.
SHOW TRANSCRIPT

After one NBA championship appearance, three conference finals and five trips to the playoffs the Oklahoma City Thunder have fired Scott Brooks.

Brooks just finished his seventh — and final — season on the Thunder's bench with a total 338 wins and 207 losses averaging out to a .620 winning percentage since he's been in OKC.

In a statement about Brooks firing, Thunder GM Sam Presti said, "This decision is not a reflection of this past season, but rather an assessment of what we feel is necessary at this point in time in order to continually evolve, progress and sustain."

"Later that night he told me I had a crack in my foot and I needed surgery," Kevin Durant said.

This past season was certainly a train wreck for the Thunder, who were derailed by injuries over and over again throughout the year. But Brooks and company still managed to pull out a winning record and the Thunder ended their season one win away from the eighth playoff spot. (Video via The Oklahoman)

But no matter who or what may be to blame for the Thunder's average season Brooks seems to be the one paying for it and now that he's gone some lucky or potentially unlucky coach will be inheriting the team Brooks built.

While OKC dealt with an injury-plagued squad all season, the Thunder still has one of the best two-player combos in the league. Kevin Durant, has four scoring titles and was the 2014 MVP.

Meanwhile Russell Westbrook, won the scoring title this past year and had 11 different triple-doubles, four of which came during back-to-back games. And of course, there's the 2012 and 2013 NBA blocks leader Serge Ibaka coming back from an injury for the 2015 regular season.

One could compare the OKC job to Steve Kerr's gig in Golden State. Former Warriors head coach Mark Jackson was fired at the end of the 2013-2014 regular season after dragging the team from the bottom of league standings — only to be replaced by current head coach Steve Kerr after having the best regular season of his coaching career. Kerr has now guided the Warriors to a 67-win season, the best record in the league. (Video via KRON, YouTube / Scott Cody)

And while a winning team and superstar players seem like great perks for the next coach, it could all possibly go horribly wrong.

"What's your take on Kevin Durant in 2016?" Kevin Negandhi said.

"I can more than imagine it! I'm almost ready to predict it." NBA analyst Chris Broussard said.

Kevin Durant's contract in Oklahoma City expires next summer and Durant, being one the of the most prolific scorers in the NBA, will probably be wined and dined by most teams in the league. The very next summer, Russell Westbrook's contract expires, meaning OKC could be left without either of its superstars just two years after the new head coach takes the job.

As for who may end up in the hot seat, there are a lot of rumors floating around, but the most popular potentials seem to be two college coaches, Billy Donovan of Florida and Kevin Ollie of UConn. Ollie is a former teammate of both Kevin Durant and Russell Westbrook and Donovan is one one of the most respected college coaches in the country. Neither has ever coached in the NBA. (Video via University of Florida)