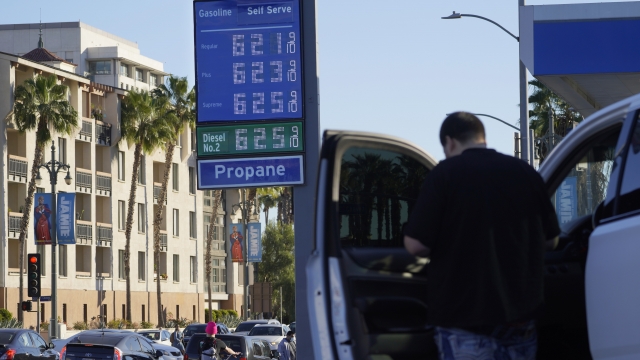 SMS
Oil Prices Are Surging
By John Mone
By John Mone
February 24, 2022
The economic ripples are being felt at gas stations across U.S.

Oil markets roiled by war and uncertainty, make for a certainty in prices. You pay more at the pump.

"It really affects me ...from where I come from home to go to work, it's a long distance," said Stephanie Humphrey, adding that higher fuel costs are biting her budget

"Yeah, it's affecting my budget, I can't go out to eat as much anymore," Humphrey says.

Pain at the pump may drive some to rethink their vehicle choices.

"Oh, this thing- it's a gas monster," says Noah Rodriguez, who loves his truck, but he doesn't love the cost of filling up anymore, so he may sell it.

"If prices keep going up it's gonna be easier to make the decision," Rodriguez said.

The American Automobile Association says gas prices nationwide are topping $3.50 a gallon for regular, other grades surging in price too. That is a reaction to oil markets. Price per barrel now hovering above $100. The AAA adds, that oil costs account for about 50% of what you normally pay at the pump.

"So, you know, while you had that big jump in oil, you had a much smaller increase in pump prices. However, that will probably continue as long as our oil prices stay elevated," Andrew Gross, AAA spokesperson, says.

Those oil prices will nudge higher as long as there is geopolitical turmoil with Russian aggression into Ukraine.

"Right. Oil just doesn't have great substitutes. You know, we don't have alternate transportation fuels. Oil is pretty much the only thing we've got. You know, other than electric vehicles, you know, creeping in around the margins. So that's what makes it so important, so strategic," says Jim Krane, fellow at Baker Institute at Rice University.

Russia is a player on world oil markets, being the second largest exporter of crude in the world if it's hit with sanctions because of its military maneuvering, it will also affect world prices because major economies remain largely dependent on carbon output.

"Gasoline prices in the U.S. respond really quickly to the geopolitical stress. So, it doesn't matter where it happens, that's going to play out in the U.S.," Says Krane.

"I invest in oil and gas, so that part may be good, we'll wait and see but as a consumer at the pump it hits a little hard," says Houston investor Michael Moity.