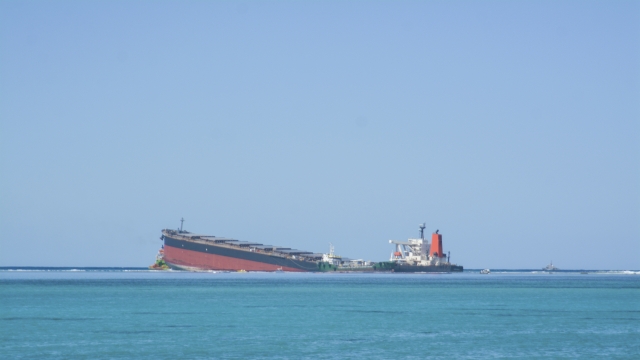 SMS
Oil-Leaking Ship Off Mauritius Breaks Apart
By Nathan Byrne
By Nathan Byrne
August 16, 2020
The ship struck a reef on July 25, releasing oil into the Indian Ocean that damaged the environment.
SHOW TRANSCRIPT

The grounded Japanese ship that leaked 1,000 tons of oil near protected areas off the island nation of Mauritius has split in two.

The ship struck a reef in the Indian Ocean on July 25 and its hull began to crack after just days of absorbing the pounding waves. Fuel began to leak into the water off the coast of the African continent on August 6. Environmental groups warn the damage could be irreversible. Thousands of volunteers have rushed in to help.

Most of the remaining 3,000 tons of fuel was pumped off the ship in the past week. But that response wasn’t immediate. The Mauritius government has blamed bad weather for its lack of action.

The government is suing the ship’s owner, Nagashiki Shipping. The company is doing its own investigation of why the ship went off course.

Mauritius relies heavily on tourism and has already taken a severe hit from travel restrictions imposed during the coronavirus pandemic.