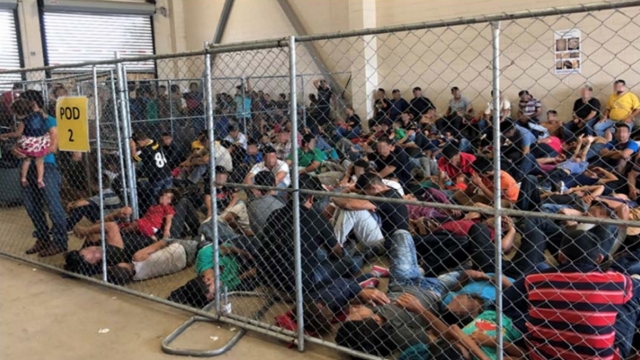 Children are being denied hot meals and adults are forced to stand amid "serious overcrowding and prolonged detention" at Border Patrol Facilities, according to a critical report by the Office of Inspector General.

In particular, the inspector general said migrants are being kept at detention facilities longer than federal standards and those of a court settlement.

They say migrants should not be held at facilities longer than 72 hours. However, 3,400 of the 8,000 detainees were kept beyond the permitted 3 days. Of those, 1,500 were in custody for more than 10 days.

In addition, nearly 2,700 children were held at the facilities longer than permitted and some younger than 7 years old were in custody for over two weeks.

At three of the five facilities, children had no access to showers and limited access to changes of clothes, even though federal standards require access to a shower after 48 hours in detention. For adults, it's 72 hours. However, most migrants did not have a single shower, even after a month. Wet-wipes were given for personal hygiene. Many in custody spent 30 days in the same clothes they arrived in.

Two of the facilities did not provide hot meals to the children until inspectors arrived. The children were fed sandwiches and snacks for meals. As for adults, many were only being given bologna sandwiches, which caused some to need medical attention.

The report says the U.S. Customs and Border Protection Agency was unable to meet federal standards due to the overcrowded conditions.

While CBP is responsible for migrants to be detained short-term, it is unable to transfer the migrants to immigration enforcement centers for long-term detention. The problem is, ICE facilities have limited resources nationwide. A senior manager at one of the border detention locations called this a "ticking time bomb."

The Department of Homeland Security has deemed the situation an "acute and worsening crisis." It shared its efforts to alleviate the problems by adding 2 tents in the Rio Grande Valley, fitting 500 beds each, to reduce overcrowding among single adults.

The Inspector General report recognized the challenges the CBP and Homeland Security faces, but said  "we remain concerned that DHS is not taking sufficient measures to address prolonged detention in CBP custody among single adults."

The report also required DHS to transfer single adults to ICE custody as quickly as possible.