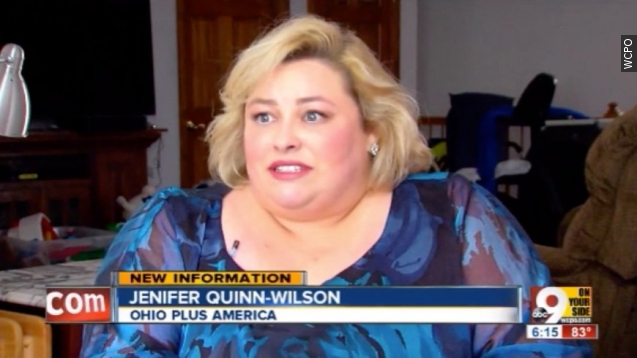 SMS
Ohio Woman Once Scared To Leave Her Home Wins Beauty Pageant
By Katherine Biek
By Katherine Biek
July 7, 2015
Jenifer Quinn-Wilson developed agoraphobia after an incident when she was 18 years old. It looks like she's more than overcome that fear.
SHOW TRANSCRIPT

"I think it all started to change when my husband passed away in August of 2010. When he passed away, I knew it was time. It was time to change," Jenifer Quinn-Wilson told WCPO.

Jenifer Quinn-Wilson is a hermit turned beauty queen. She told Newsy's partners at WCPO that she spent a whole decade too scared to leave her home after two strangers accosted her when she was 18 years old.

"Opened up my back door and threw his girlfriend in my backseat ... and informed me that their car broke down and I needed to take them somewhere where they needed to be," Quinn-Wilson said.

Quinn-Wilson ended up developing an anxiety disorder known as agoraphobia.

According to the Mayo Clinic, people with agoraphobia "fear an actual or anticipated situation," which for Quinn-Wilson was the fear of leaving her house.

After her husband passed away in 2010, Quinn-Wilson made the decision to overcome that fear. She entered the Ohio Plus America Pageant in May and won.

"I want to change the way people look at plus-size women," Quinn-Wilson said.

That win means she'll head to Atlanta at the end of July to compete at the national pageant, more than 450 miles away from her hometown of Maineville, Ohio.