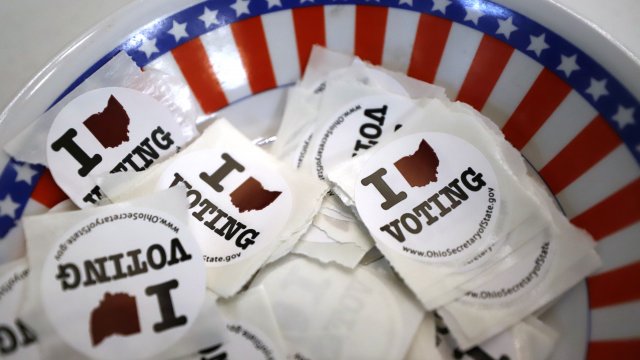 All polling locations for Ohio's primary election Tuesday will be closed, following an order by the state's Department of Health.

Issued by Ohio Health Director Dr. Amy Acton, the order comes in response to the growing number of confirmed coronavirus cases in the U.S.

In the order, Dr. Acton writes, "To conduct an election at this time would force poll workers and voters to face an unacceptable risk of contracting COVID-19."

The order took effect immediately late Monday, despite a judge reportedly denying an attempt to postpone the election earlier in the day.

Ohio Gov. Mike DeWine is expressing support for the order, writing on Twitter, "The only thing more important than a free and fair election is the health and safety of Ohioans."

Meanwhile, Ohio Secretary of State Frank LaRose says adjustments are being made in order to ensure voters have the opportunity to be heard at a later date.

"What I directed the boards to prepare for is to conduct an election on June 2. That gives us time to continue accepting vote by mail ballots then to have our in-person voting on June 2," LaRose said.

However, the decision is being met with some pushback. Mayor of Cincinnati John Cranley said on Twitter, "I have supported Governor DeWine's other public health orders, but moving Ohio's primary Election Day with less than 24-hour notice is one I respectfully disagree with. I call on the State to mail absentee ballots to all registered voters and encourage mail-in voting."

According to the state's Department of Health, the order will remain in effect until the state of emergency declared by the governor no longer exists or the state's director of health modifies or rescinds this order.