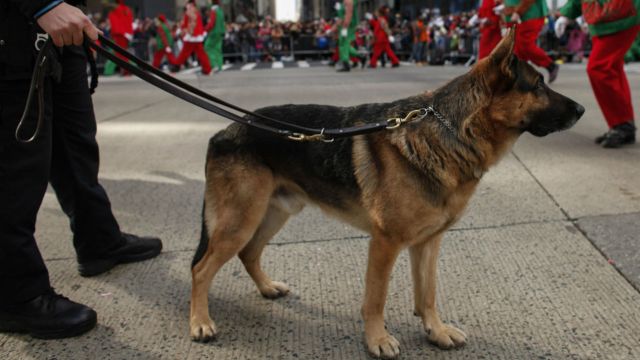 Ohio police officer Matthew Hickey was ready to adopt his K-9 Ajax when he retired in late January. But now he will have to compete with other dog handlers at an auction to bring his partner of four years home.

The real confusion about what to do with Ajax stems from the wording of a state law. It says that when a city's K-9 unit is disbanded, the officer can purchase their dog for $1.

Hickey interprets this as saying he and Ajax are one unit who are now disbanded due to Hickey's retirement. But Marietta Mayor Joe Matthews interprets the law as saying the entire police department's K-9 unit would have to be disbanded. (Video via NBC)

The city of Marietta reportedly hired a vendor who determined Ajax is worth $3,500. Ohio state law says any city property valued at over $1,000 has to be sold at auction. (Video via WBNS)

The law also says the officer who handles a police dog has first dibs to buy their K-9 when the dog retires. But Ajax is only six years old and could continue working for the department for up to six more years. (Video via WCMH)

If Ajax doesn't stay in Marietta, he'll likely end up in good hands. In Ohio, K-9s can only be sold to a qualified buyer like another police department or a retired K-9 handler.

And police dogs aren't usually cheap, either. The National Police Dog Foundation says because most police dogs come from Europe, the cost of a police dog can be upwards of $8,000.

A GoFundMe page was set up to help Hickey. As of Sunday night, the page had raised more than $50,000 to buy Ajax at auction. According to the site, the extra funds will go to an organization that buys bulletproof vests for K-9 units.

No word on when Ajax's auction will take place. For now, he will keep calling Hickey's place home.