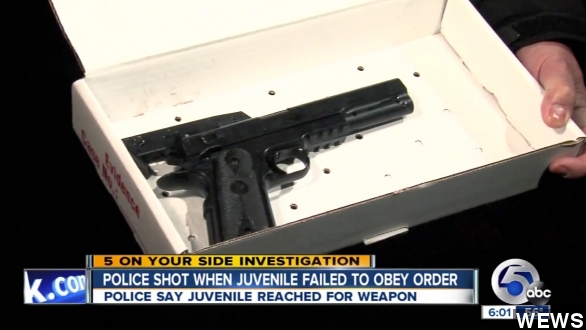 Officials in Cleveland say a young boy is dead after officers mistook a BB gun for a real firearm and opened fire on the boy. Medical officials confirmed 12-year-old Tamir Rice died Sunday morning at a local hospital after fatal gunshot wounds to his torso.

WEWS reports Cleveland police responded to a 911 call Saturday. The unnamed caller said people were scared as the boy wielded the gun at an outdoor rec center but also said he thought the gun was fake.

Police say they ordered Rice to put his hands up but he allegedly refused to do so and reached to pull out the gun, so they opened fire.

"The officers ordered him to stop and to show his hands and he went into his waistband and pulled out the weapon. One of our officers fired two shots striking the young man," Deputy Chief of the Cleveland Police Department Ed Tomba told WDTN.

Police say the boy was actually carrying an "airsoft" replica gun. They also say the orange safety indicator was removed from it.

As part of regular protocol, the Cleveland Police Department has opened an investigation into the shooting and has put both officers who responded on administrative leave. Meanwhile, Rice's mother has reportedly hired an attorney to look into the incident as well.

According to Cleveland.com, "[Her attorney] pointed out that the boy never actually pointed the gun at the officer, but said he could not give an alternate account of events."

The Cleveland Police Department has faced some criticism over the past few years for its use of deadly force.

Last May, an officer was charged with two counts of manslaughter after he shot and killed two suspects in a wild car chase in 2012 involving at least 60 police cruisers. No weapon was reportedly found in the suspect's vehicle, though police say they were fired on.

Just last week, the city of Cleveland settled that case and will pay out $1.5 million to each of the victims' families.