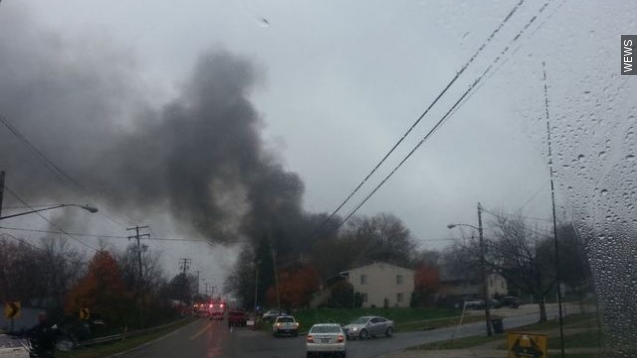 SMS
Ohio Plane Crash Kills At Least Nine
By Matt Picht
By Matt Picht
November 10, 2015
A small plane carrying nine people crashed into a Akron, Ohio neighborhood Tuesday. There were no survivors on board.
SHOW TRANSCRIPT

Authorities say none of the people on board a small plane which crashed into an Akron, Ohio neighborhood Tuesday survived the crash.

"What we do know is that the plane, when it did go down, it struck one house. ... The plane became engulfed in flames which ignited the residence that it struck and then continued on to another residence that was behind that house," an Ohio State Highway Patrol spokesman told reporters.

"A plane just dropped out of the sky, veered to the left and plowed into those duplexes there. It was just a mass explosion," one witness told WKYC.

The plane, a small business jet capable of seating 10 passengers, was traveling from Dayton, Ohio. It was making its final approach to Akron Fulton International Airport when it went down. The cause of the crash is still unknown, but poor weather in the area might have been a factor.

At least one building was completely demolished in the crash, but no people on the ground were hurt. The plane's owner told multiple outlets nine people, including the pilot and co-pilot, were on board at the time of the incident. The NTSB and FAA are currently investigating the crash.