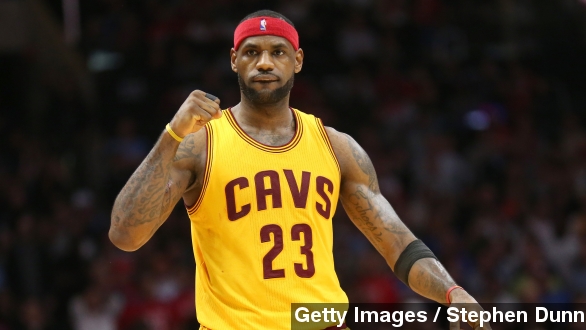 In high school, LeBron James was a big deal. That's part of the reason the future four-time NBA MVP was drafted first overall in 2003 by the Cleveland Cavaliers. James was just 18-years-old when he went straight from high school to the pros.

And while James has two NBA Championships added to his resume, too, one Ohio high school senior does have a few bragging rights over him — just in case the two ever meet up in the NBA.

"This is the moment. Step back three from nearly 25 feet away, nails it," WKEF anchor Erik Elken said.

"Oh my goodness! it was loud in there and then when I made the shot. Man, my eardrums about bursted," Kennard said.

Kennard even got a bit of national love on ESPN's SportsCenter for the feat.

"Being on ESPN, like I said, it was a dream come true," Kennard said. "I still don't know what to think of it. People have been like been like, 'Oh my goodness, you were on ESPN last night.' But really excited, and hopefully it gets better from here."

Not surprisingly, Kennard is no slouch of a player. He's a McDonald's All-American and is set to play college ball at Duke after graduation. 247Sports grades him as a five-star recruit.

No love lost from LeBron, though. James was asked about Kennard closing in on his record last week and didn't seem too worked up over it.

"He's not coming up on my assists record though or my wins in state championships," James said jokingly. "No he's one of my kids. That's great. That's great. I'm happy for him."

Kennard likely won't stop at No. 4, either. He sits just 29 points away from the third overall spot.