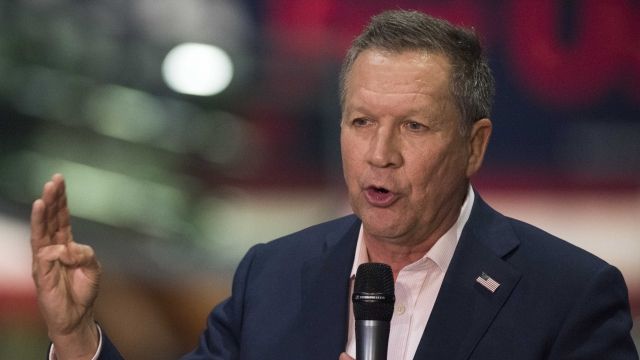 Ohio Gov. John Kasich has vetoed a measure that would have halted the state's transition toward renewable energy.

Ohio law currently mandates the state's power companies must gradually ramp up the percentage of renewable energy they supply — up to 12.5 percent by 2027.

The state also has efficiency standards that require Ohio utility companies to sell 22 percent less power in 2027 than they did in 2009.

This recent bill from the state's GOP-controlled legislature would have made those standards voluntary — if Kasich hadn't vetoed it.

Unlike most of his rivals in the Republican presidential primary, Kasich openly supported green energy as a means of fighting man-made climate change.

That's angered some of Ohio's state legislators. State Sen. William Seitz, who sponsored the vetoed proposal, accused the governor of ignoring "the millions of Ohioans who decisively rejected this ideology."

Other recent vetoes from Kasich include a tax break for oil and gas companies and a strict restriction on abortions. Lawmakers have until midnight Saturday to attempt to override those vetoes.