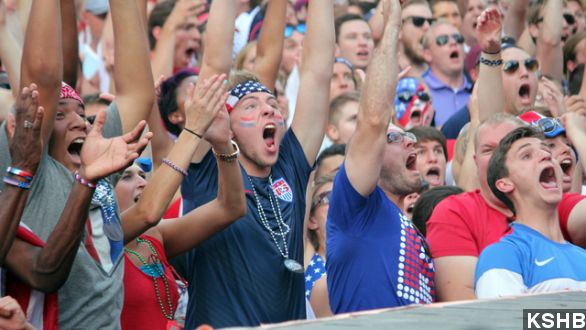 By Sebastian Martinez
June 26, 2014
As World Cup fever grips the U.S., the question arises: why do Americans care all of the sudden?
SHOW TRANSCRIPT

If you watched the U.S. men's national soccer team take on Portugal on Sunday you weren't alone.

Almost 25 million people across the country tuned in to watch the Yanks give up a last-minute draw, making it the most-watched soccer game in American history. And it was more viewers than the NBA finals, the World Series and the previous record which was set... well, the week before, when the U.S. took on Ghana. (Via Miami Herald, KSHB)

So if you're asking yourself, why do Americans like soccer all of the sudden? Well you're not alone there either.

Media outlets from The Guardian to NPR are asking that same question, and there are a lot of theories, and probably no one right answer.

It could be the U.S.-friendly start times, with games kicking off at noon, 3 and 6 p.m. eastern. Or it could be how well the U.S. has done in the tournament: surprisingly beating Ghana and drawing — that's tying — Portugal. (Via FIFA, Flickr / Mobilus in Mobili)

One thing that seems certain: the soccer craze that's sweeping the nation? It's been a long time coming.

According to The Huffington Post, "The two demographic groups most passionate about soccer are young adults -- those ages 18 to 29 -- and Hispanics."

And that booming popularity is evident in the U.S.'s domestic league: Major League Soccer. A decade ago the league only had 10 teams. Now, the league boasts 19 different teams, with two more clubs in the works. (Via MLS)

Forbes reports that, "MLS’ avid fan base is the fastest growing of any sport, outpacing all others in the ten-year periods from 2001 to 2011 as well as 2002 to 2012. And the gains come from nearly all ages of both genders."

So chances are, even if this World Cup is your first time watching soccer, you probably know a serious fan or two. But how much of this soccer fever will outlast the World Cup?

​A sports writer quoted in The Guardian draws a parallel with the Olympics, commenting, "When it's going on you're very interested, very into it particularly if your team's doing well... But that tends to dissipate unless there’s something foundational in front of you on a regular basis.”

And that's what networks like NBC, which bought the rights to the English Premier League, the most-watched league on the planet, are trying to cash in on.

Over the past season, NBC Sports made a bid for viewers by offering every single game either broadcast on TV or through the network's online player. (Via WorldSoccerTalk.com)

It's hard to say whether the U.S.'s enthusiasm for soccer will outlast the World Cup and the U.S. men's team's run in it, but if you feel the impulse to call in sick when the Yanks face off against Germany, odds are you won't be the only one.