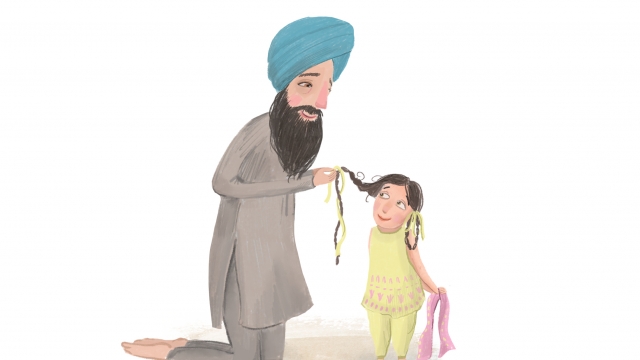 SMS
Tired Of Being Misrepresented, Sikh Americans Create Their Own Stories
By Cat Sandoval
By Cat Sandoval
May 20, 2021
Author Simran Jeet Singh says the challenge is for mainstream media to cover beyond moments of violence and racist hate.
SHOW TRANSCRIPT

"Our culture just does not reflect people who look like me," adds Vishavjit Singh, a cartoonist.

Vishavjit Singh and Simran Jeet Singh are creating their own stories because our culture under or misrepresents their Sikh community.

"A lot of people feel like they're not represented in America's culture. And certainly I feel that way," says Vishavjit.

"We show up in the world so visibly distinct that everyone notices us wherever we go," says Simran.

Some Sikhs wear turbans and leave their hair uncut as a sign of equality.

Both men are part of a religious minority community within the broader Asian American term. But in today's pop culture, the half a million Sikh Americans have very little representation.

When the media does cover the Sikh community, it’s usually when tragedy strikes, like post 9/11 when they were mistaken for Muslims and hate crimes were high. ... Or the shooting in the FedEx facility in Indianapolis this year.

"The challenge, I think, and the next step is to go beyond telling these community stories only in the moment of violence, of racist hate," says Simran.

Vishavjit echoes Simran. ... who despite being born in America, still feels like he is treated like "the other." And that storytelling is a step towards reversing that.

"I feel that is one of the strongest tools we have to overcome hate and bias." says Vishavjit.

Vishavjit even made Captain America come alive by challenging the concept of what it means to be a quintessential American superhero.

"I've been donning this uniform because I feel it does push people's stereotypes," Vishavjit.

Simran published  a children's book about  Fauja Singh, the first person to complete a marathon at 100 years old. The book tackles ageism, xenophobia and racism, and deals with disability.

Still even with positive representations if it's limited it's still a problem.

"We have to represent ourselves, but the system has to also create, open those doors," says Vishavjit.