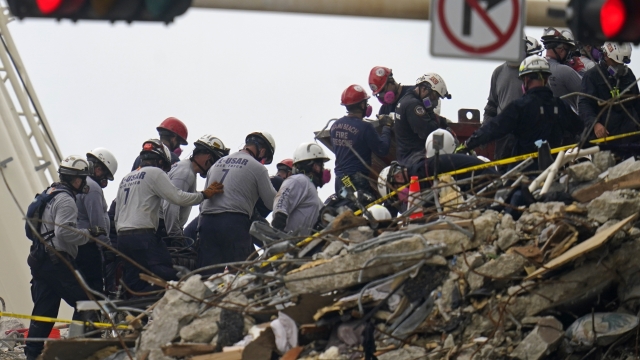 A desperate search for survivors continues in Florida.

It's been one week since a condo collapsed in Surfside. The death toll, going up again yesterday, is now at 12 people and 149 are still missing.

The White House says President Biden will be in Surfside tomorrow. And authorities there are asking the federal government for an additional rescue team to help comb through the rubble.

Because this is what rescue crews are up against: Exhaustion — they've been working around the clock; severe weather making an already dangerous situation even worse; and they're navigating a highly unstable building in a race against the clock. But still they're forging ahead.

"I can tell you that none of us have lost hope, because I know miracles happen, and I believe in a higher power, and I believe that if somebody is going to find them, we're going to make it happen and working together as best we can," said Miami-Dade Fire Rescue Capt. Eddy Alarcon.