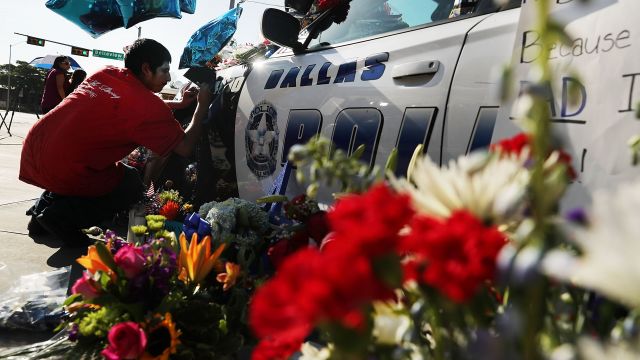 "We are not going to let a coward who would ambush our police officers change our democracy," Dallas Police Chief David Brown told reporters.

Dallas police believe the shooter responsible for the deaths of five officers was planning a bigger attack.

Authorities say the suspect — identified as Micah Johnson, a member of the Army Reserve for six years — was planning to attack police on a larger scale but fast-tracked those plans after the recent police shootings of two black men in Minnesota and Louisiana.

A source told WFAA, "We think he was probably planning something bigger based on what we found at the house with the explosive materials."

Police say Johnson didn't have any explosives built, but he had plenty of materials to create pipe bombs.

Protests were triggered around the country last week after the officer-involved shooting deaths of Philando Castile and Alton Sterling. WFAA's report said the shooter knew police would be out in full-force at protests in Dallas.

Police reportedly found an arsenal of weapons amassed by the shooter when searching his home. They say he "wanted to kill white people, especially white officers."

"This was a mobile shooter that had a written manifesto on shooting and moving. He did his damage. We did damage to him as well," Dallas Mayor Mike Rawlings said.

Authorities say he didn't have any ties to terrorist organizations or a criminal record. The investigation into the shooting is ongoing.